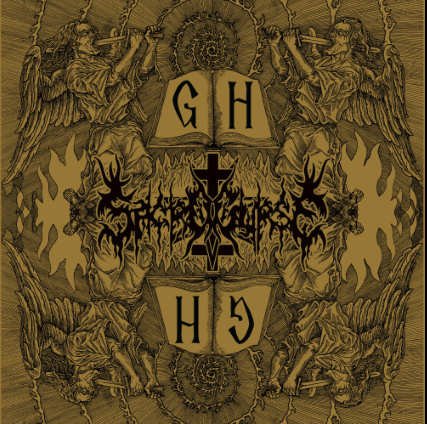 War/Bestial Black metal is a fascinating subgenre, being re-emerged a few years ago, to just go back into the underground having spawned too much copycats of the infamous unholy trinity Blasphemy, Beherit and Conqueror. Sacrocurse fortunately have their own doses mixed up with some more Death Metal tones here. Sure, comparison can be made with Morbosidad for example, maybe being the closest allies of Sacrocurse. But as mentioned Death Metal is a huge factor too and here we are speaking about bands like Sadistic Intent or some Swedish combo. The pace is set high with lots of blasts, chaotic riffs and buzzsaw sounds. This is simple structured, focused on violence and direct power unleashed to the listener. The cool thing is that Sacrocurse keep it simple and catchy, as there are even choruses were you can raise your fist and singalong phrases like “Chaos, total chaos”. Wonderful! Some religious chorale in front of a song just distracts from what`s going to be afterwards, namely black chaotic maelstroms of demonic hate but not necessary blasting all the way through, more being a panzerlike invasion of sacred territories. Heavy load of black death with chaos solos the Slayer way. Afterwards it`s war again! Rapidfire drumartillery, bassbombz, guitarshoots and vocalpyros all simultaneously…it is Holocaust until the end. Fans of bestial brutality should have this in their collection. (DPF)