Musmahhu – Reign of the Odious 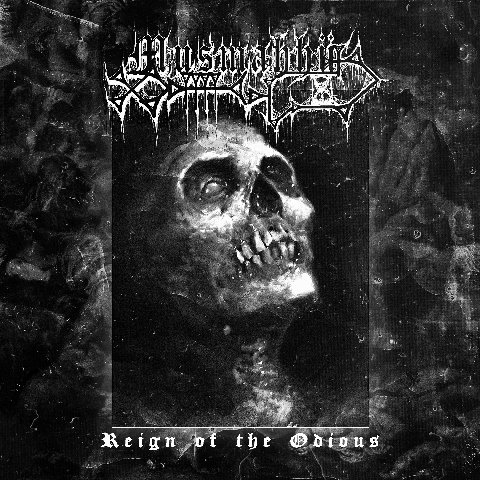 I had the pleasure of reviewing the first release from Musmahhu on this very site thanks to Ricardo being an awesome fucker and knowing what I like best, and you can find it here (Musmahhu), and this will also save me a lot of time explaining shit so I’m rather pleased with that, as it saves me a lot of waffle. So, these, or should I say this individual (I mistakenly thought there was more members on the initial release, as info on the project can be hard to find) is back with even more cavernous wonder with which to batter our tender ears.

First impressions are always an important thing, and Musmahhu do not fail on this at all. Yes, you are again drowning in the mire of Death, but this time it seems more to me like Blackened death than just pure death, and as each musical passage flies past you can almost sense that the man behind this has been listening, and waiting to unleash this full creation upon us. A mighty creation it is indeed, but by the end of it one wonders if it was worth spreading the excellence out so far. The initial push into this territory was, and is, utterly brilliant, and by the end this one sounds so samey and familiar that you are still wishing for more in a way. Please don’t get me wrong, but the first release whet my appetite to such a degree that I was so hungry for more, and this one just doesn’t seem to cut it.

It is an excellent album, and I don’t fully understand why it does not sit so well with me, maybe after a while I will get it a little more, because as stated it IS one hell of a listen, but the first release grabbed me by the throat, kicked me in the balls, and had me playing it on repeat for days. I’m not sure if this one will. Maybe the concentrated aggression and atmosphere in a tight space was perfect, this is not perfect, but still very worthy of your time, trust me on that at least.

The beast has arisen. All hail the beast, eventually one head must take over and choose a solid direction in which way to go forth (read my first review). I’m not sold, but still hopeful that Musmahhu can be totally fucking brilliant. (The Great Mackintosh)