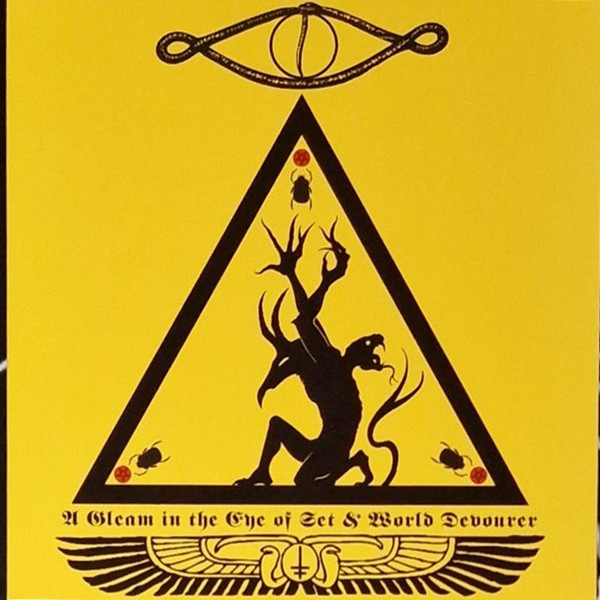 We are presented with the EP’s in chronological order, meaning we find ‘A Gleam In The Eye Of Set’ on side A and ‘World Devourer’ on the other. Despite the fact that the music was written and recorded in different sessions, it is not surprising that they appeared together on one slice of vinyl, they are quite an extension of each other musically. People who follow Drowning The Light won’t be surprised by the musical content, which follows the familiar path of atmospheric Black Metal with raw and quite sharp guitars laid on keyboards. Azgorh’s icy and equally sharp vocals are recognisable from thousands and with it comes with its almost trademark raw production: this is unmistakably Drowning The Light. Drowning The Light is an act that has all the Black Metal aesthetics down to its DNA and whose raw and old-school Black Metal is honed to near perfection. The repetitive riffs and anti-tremolo picking guitar work add to the mesmerising effect of the music, in which melody has an important role and is woven into the music in its own unique way. Those melodies come courtesy of the fairly simple guitar riffs and Dungeon Synth-like keyboards that tunefully hum along in the background for maximum result; more often than not there are several moody intros, intermezzos and outros to enhance the atmosphere. We can simply place both EP’s in that same tradition and with its slightly rawer sound, compared to the last full-length album, these two EP’s proudly find their place in the rather extensive discography of the Australian Black Metal stalwarts.

This vinyl version is released in a fairly standard format, but neatly designed in a gatefold cover, the record itself is released on both black and yellow splatter vinyl. Fans who prefer to listen to their music on CD can visit Dark Adversary for the CD versions, but several distros around the world should have copies in stock too.