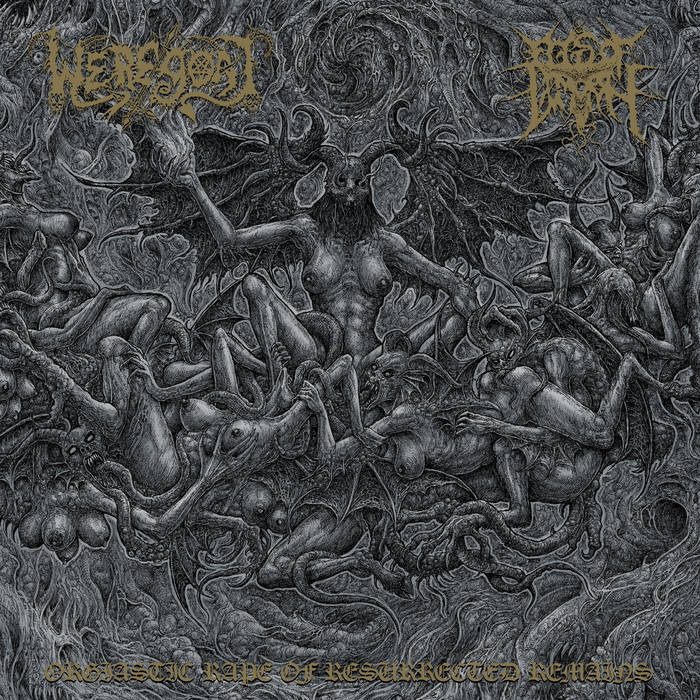 Simultaneously with the release of Weregoat’s ‘The Devil’s Lust’ 12″ EP, Iron Bonehead Productions also brings us this split LP with the Swiss Eggs Of Gomorrh. Still with the adrenaline of the EP’s filthy, rotting Death Metal in my veins, we’re going through this split in a heartbeat. And with a look at the back of this 12″ you know you’re in good hands when you see titles like ‘Rites Of Cuntrition’ and ‘Demonic Triphallus’.

Weregoat opens the split with three songs in their trademark filth and fury fashion. The typical Ross Bay Cult-esque approach of messy Death Metal with thick layers of Black Metal and characteristic Grindcore-like sawing guitar sound again results in a huge pile of noise that is completely in the vein of Blasphemy, Archgoat and Proclamation. The music is “brightened” up here and there with some Hammer Horror-esque movie samples and the vocals are made even dirtier by the occasional use of a pitch shifter. In short, the whole brooding mess is complete. Very little new under the sun so here, in fact: nothing new under the sun. And that’s a good thing!

If you think Weregoat rants like crazy, you should definitely listen to the Swiss band Eggs Of Gomorrh. They are even more angular and chaotic than the Americans. A slightly more mechanical and drier sound make this a bit closer to the ‘War Metal’ scene. Although I have always found this a somewhat uncomfortable term, it does give a nice description of what it sounds like: a big cesspool of noise in which Death Metal, Black Metal and Thrash Metal are chaotically mixed together in almost equal parts. Eggs Of Gomorrh actually sounds most like Angelcorpse. But compared to Angelcorpse, and Weregoat for that matter, the Swiss are not really convincing or of the same level yet. Where Weregoat effortlessly captures the soul of bands like Blasphemy and Proclamation, Eggs Of Gomorhh comes across as somewhat forced and misses the authentic sound.

The cover gracing this split LP is again one of pernicious beauty, made with a little more finesse than the one Sadistik Exekution’s Rok made for ‘The Devil’s Lust’. While it may seem more subtle that a woman getting it from behind with a stake through her head, on closer inspection, this cover depicts an equally joyous scene. Fans of the better not-so-subtle chop-and-punch work can indulge again, hopefully next time we won’t have to wait so long for another Weregoat release.