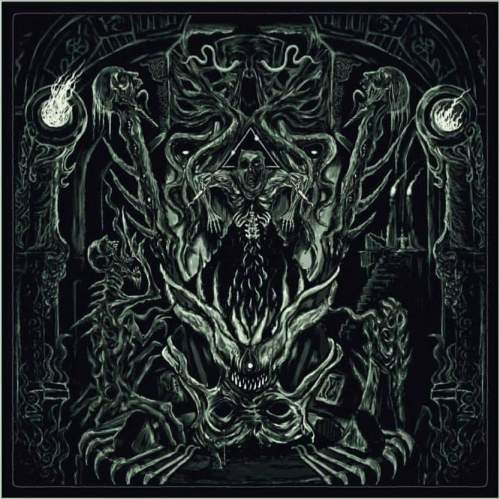 Long name and title, cryptic sounds, horrific image, darkness unveiled. This is Lovecraftian horror Death Metal from The States. 4 years after their demo “Order of the Nameless Ones” presents their nightmarish Death Metal vision with “Utter to Me the Word of Wrath”. An occult touched Black/Death mix with influences ranging from band like Portal, Immolation, Incantation, some later Morbid Angel and a dose of Ritual Chamber.

Downtuned guitars, low thundering bass, versatile drumming and cavernous vocals that speak about unspeakable and unnameable things that lurk in the dark. The variation in the riffs and songs lies in the detail. The band knows how to create a dark dense atmosphere and is capable to vary speed to remain interesting. The blast passages a fiery and the slow sections ultra-heavy. Sometimes doomy Nile moments come to mind. The dissonant riffs are ugly, disgusting and will please fans of Unaussprechlichen Kulten as well. Here and there the vocals are doubled, or some inhale like whispering nightmares crawls out of the boxes. Everything is rounded up by a good production and a killer artwork by Nether Temple Design. Recommended. (DPF)

Order Of The Nameless Ones