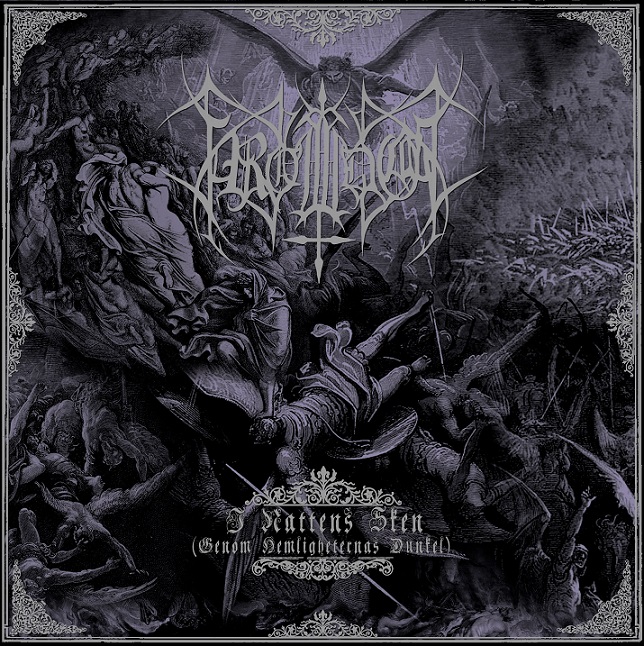 One of the two albums that got released at the very same time by Swedish Trolldom, the brainchild of Swartadauþuz. One of the brainchilderen, actually. As this sinister figure is also the driving force behind a large amount of other bands/projects, such as Bekëth Nexëhmü, Digerdöden, Gnipahålan, Greve, or Mystik. This album, as said, comes as a twin-release six years after its one and only demo from 2016.

This ‘I Nattens Sken’ is a very dynamic sounding Melodic Black Metal record that fits right in the 90’s tradition of Symphonic Black Metal which is currently undergoing a comeback of sorts. However the music is not much unlike a few of the ‘old Gods’ like Obtained Enslavement, Odium or even Limbonic Art it also fits just besides newer acts like Evilfeast or Vargrav. Though Trolldom sounds a bit faster on ‘I Nattens Sken’ than on the aforementioned demo or its twin-album (‘Av Gudars Ätt’). The searing tempo (not much unlike old Setherial) and the lesser use of ambient passages mean that this album has a slightly different approach than the other two releases in the discography. Swartadauþuz is a musical centipede with a seemingly never-ending stream of ideas and creativity but with Trolldom he proves to be more than a one-trick pony as he managed to musically move this project away from the others. Yet, most notable (when compared to his other endeavours) is the good sound, bombastic and clear at the same sound – that fits the music just great and makes it a lot more accessible and, almost, easy to listen to.

With ‘I Nattens Sken’ Swartadauþuz delivers one of his best recordings till date. He proves that searing speed and melody can go hand in hand and can result in a truly great record. If you’d like to have a good impression, listen to the great and majestic closer ‘Till Ruinens Svarta Rike’, a true beauty. (FelixS)