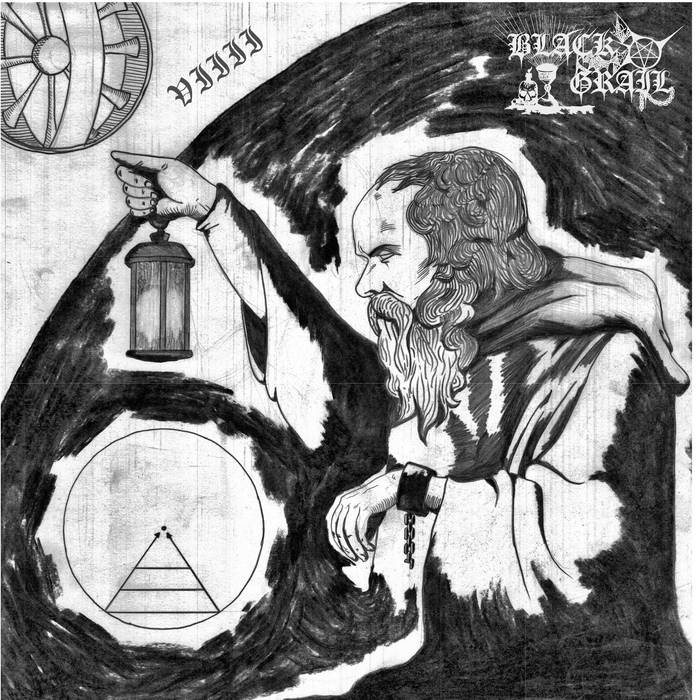 Satanic/Occult obsessed Santiago, Chile based Black Metal band Black Grail have been active for the better part of two decades, however the post-Covid period has seen them at their most prolific to date in terms of releases. ‘VIIII’ is the trio’s brand new EP release and has been picked up by Iron Bonehead productions who have adorned both a CD and 12″ vinyl cover with the glorious artwork that you can see to the left.

What I wasn’t expecting from a Chilean Black Metal release was a slow, calm opening in which the subtle strumming of bass, and clean guitar tones meander somewhat serenely as the opening track builds slowly and surely, introducing chanted and croaked vocals and then controlled drum tones chime in as the clean guitar tones fade away and more severe sounding riffs gently make their way into the bands sound. In truth i don’t like the cleaner vocals on offer, they are out of tune and the vocalist can’t carry the right pitch for what he’s trying to deliver. Not only that, but the pace never picks up and the seven minute opening track just plods along and never reaches a crescendo. I’m not entirely sure what Black Grail were going for here but it simply doesn’t work. This wouldn’t have worked as a middle of the EP interlude, to open with it and then to continue into the next track in the same style is ludicrous.

Following this agonizing start to the EP the guitar leads final increase in hostility and the darkness descends as shrieked vocalled normality is somewhat resumed. The drumming display is simple yet savage and the band have bouts of intensive, dark riff-age here and there, but in truth this release never recovers from that disastrous and lengthy opening and for the most part ‘VIIII’ simply meanders through the motions of average musicianship, the odd moment of catchy fluent riff-age and very lack lustre song writing. With a roster the size and quality of Iron Bonehead’s, I’m not really sure what made them opt this. (Luke Hayhurst)