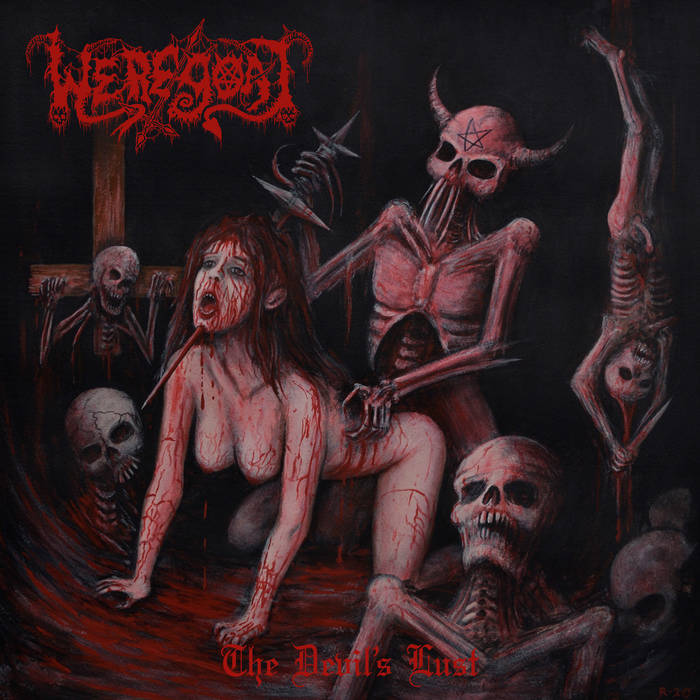 Upon seeing this new EP, put in a subtle cover by Sadistik Exekution’s Rok, I had dived into my own collection. I hadn’t listened to Weregoat in a while and wondered if I was still a bit up to date. Fortunately, these Australians have not been too enthusiastic in recent years and I only ‘missed’ the debut album from 2017, also released by Iron Bonehead Productions. The amount of homework was manageable; after listening to some vinyl from my own selection and looking up the debut album I was completely ready for a new slab of over-nuanced Australian noise.

But, really, all that effort was pretty much unnecessary. Despite the fact that I had lost sight of these Australians for several years, nothing has changed about their musical concept. Thankfully. Still Weregoat sounds like the Australian equivalent of bands like Archgoat, Blasphemy, Proclamation, Teitanblood, Black Witchery or like their Aussie brothers from Bestial Warlust. In a wild barrage of riffs, screaming whammy solos, chopping drums and pitch-shifted (or not) vocals, the band works through the six songs in just over 20 minutes. Weregoat’s musical identity is further highlighted by the Impaled Nazarene cover ‘Goat Perversion’, undoubtedly another band that has made valuable contributions to this most perverse of metal genres.

Although I only had the first two 12” EPs and the split LP with Diocletian in my collection and these are already almost ten years old, it seems like the band has never been away. And, fair to say, in a genre in which only a few bands actively play this bestial and grinding blend of Black and Death Metal, pretty much in the Ross Bay Cult-fashion, Weregoat is still just as welcome. (FelixS)