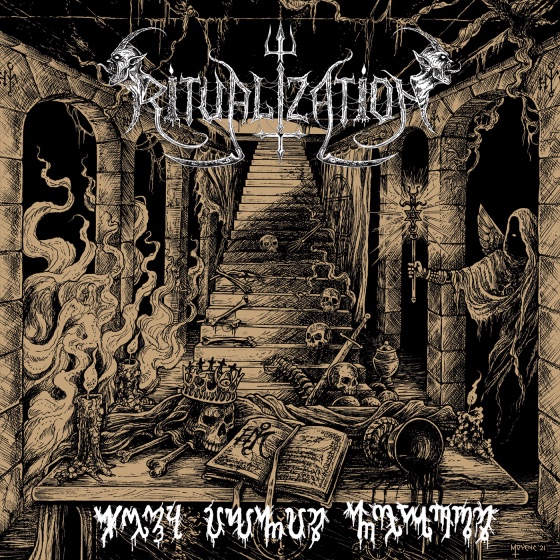 Frenchmen Ritualization, better known as the answer to Nox, Angelcorpse and the likes are back!

After their debut full length ‘Sacraments To The Sons Of The Abyss’ released in 2017, the wait for the next opus is over. This time in the form of an EP called ‘Hema Ignis Necros’.

25 minutes of dark blasphemous black/death full of chaos and abyssic torment! ‘The Shapeless Scepter’ starts slowly, lava-like,  building up a dark aura of the occult before a drumroll ignites chaotic riffing and full blasting which changes beat and speed in-between, especially during the verse with some up tempo beat (uffta-uffta anyone?), blast variations (nice Hi-Hat figures) and slow crawling morbidity with some guitar leads appearing here and there. Some hammering is provided after more than 3 minutes, changing shape of the track, making it even more brutal and aggressive (Centurian/Degial for example). After clocking in at 6 minutes, a voice from hell grunts the title and an another shift has been taken into more headbangable territories, slower, darker and after 8 minutes it morphs into some eerie sounds to conclude this first offering of the EP.

2 minutes later ‘The Crown of Moloch’ will be presented to the audience and hell, it shines and slays! 4 snare hits and Morbid Angel are right in your ear! (Yes, I had to make this comparison for obvious reasons). After the initial back beat drummer Blastum offers what his name is all about, killer blasting with tons of variations behind the kit. The guitar and bass department offers top notch skills, riffing and leads only the best are capable of and the growls and shrieks are not of this world! This track offers killer groove parts between the fast attacks which are more chaotic than on the first track but not over present. Killer progression and leads guitars after 3 minutes of the song which reminds me a lot of Nox/Centurian. The track then changes into a more melodic, mid-tempo paced banger which could have been put also on some old classic from the 90s. the last 2 minutes are giving some space to clean guitars and mid-eastern atmospheric sounds, a great move right here, with cool use of percussion and other elements.

‘ When The Chalice Runneth Over ’ starts colder, blacker than the first tracks with a more melancholic lead guitar. Blazing drums with a lot of finesse, surrounded by well elaborated guitar/bass work which make you want to listen to it over and over to grasp every detail. The tracks offers a lot of facets. In the middle of the track a great break works as a transition to lovely guitar solo and some Azagthothian riffing before shortly after the climax will be reached and ambient sounds from the underworld take over again.

To sum this EP up, a lot of progression and variation compared to the latest album. Killer mix and artwork which rounds this thing up and will be in my top list at the end of the year for sure! I hope it doesn’t take that long for the next release. Fans of twisted, chaotic, whirlwind black/death should by this immediately!! (DPF)