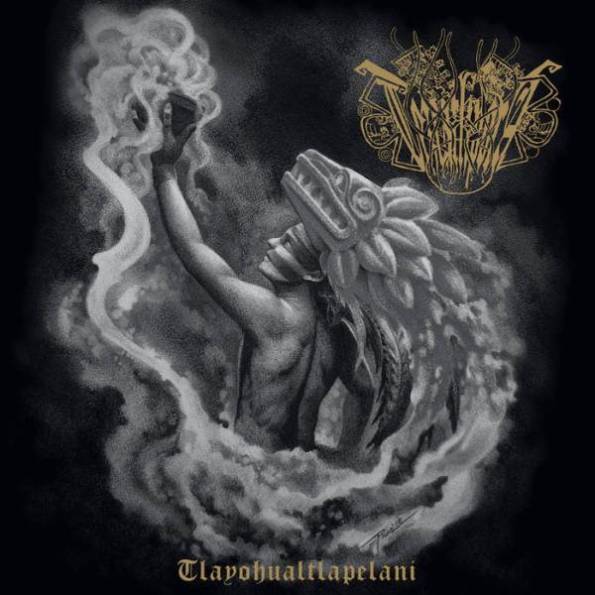 Tezcatlipoca are a band from León, in the State of Guanajuato. So far, they released one debut album entitled “Ipehualtiyayohually” (2015) through the Mexican Diabolus Productions’ label, in co-operation with Caligo Arcanum Productions from Puebla.

I have never heard the debut, so I can only focus on their second effort. The music is described as Black Metal/folk with texts, theme and lyrics in Nahuatl.

According to ancient Aztec mythology, Tezcatlipoca (or ‘Smoking Mirror’) was the god of the night and the night sky, the north, the cold and the war. Moreover, in these legends, several ‘nocturnal’ elements of seduction, deception, and black magic come to the fore. Tezcatlipoca was apparently already worshipped by the Olmecs and became generally popular from the tenth century on. He had a mirror of polished obsidian from which deadly fumes escaped, enabling him to kill his foes.

It does sound rather ominous, doesn’t it?

The album. The album kicks off with a indigenous flute before erupting into a barrage of extremely heavy drums, concrete guitar riffs and raw, shouted vocals ( no clean singing but no Black Metal vocals either ). This Mexican blitzkrieg tactic works for about 2 minutes, until you realize that the song is totally overproduced, vomiting compression in all directions and with a vocalist who tries his best to escape from this tumult by shouting in a very militant way. Even the addition of flutes can’t temper this audial storm. And it goes on like this : a very loud and hard sound without any moment of relief or acoustic bridge or part, uncapable of giving the ears a break. Seems like Tezcatlipoca have learned about the loudness wars and decided to apply it. The use of increasing audio levels, extreme dynamic range compression and boosting loudness has always been a way to attract the attention of listeners.

The thing is : although this album sounds like a cluster bomb, it loses its appeal quite quickly. The flutes are added at random, those typical Black Metal influences such as blast beats, hypnotic riffs can’t be traced. And as mentioned before – the vocals aren’t “Black Metal”. I’m still trying to find out what that awful and amateuristic sound collage of horns, drums, flutes, rain and thunder, which serves as the last instrumental track, are all about.

Before bombarding yourself to Black Metal/folk – have a look at Xibalba Itzaes, guys. Or the warlike Black Metal tornado of Tlacaelel.This simply isn’t Black Metal/folk. It’s a loud and noisy metal album with Aztec influences. And although it may seem like a nice experiment, I think I’ll pass. (LV)