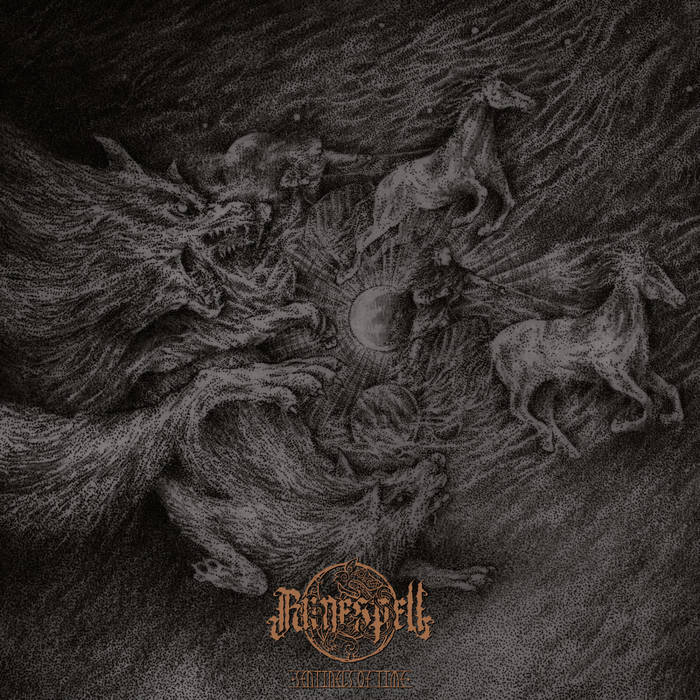 Nightwolf, the man behind Black Metal act Runespell, keeps up a healthy work ethic. The first feat dates back to 2017, the ‘Aeons Of Ancient Blood’-demo (also released on cassette and vinyl by Iron Bonehead in 2017 and 2018), but this new 4-track EP, ‘Sentinels Of Time’ is already release number seven. Well over a release for every year since its inception and once again Iron Bonehead Productions is the label on duty.

I’ve sometimes wondered if Nightwolf didn’t once consider moving to Europe, to Scandinavia to be exact. For Nightwolf on each release emphasizes that he has more to do with European history than that of his native Australia. The by now instantly recognizable Black Metal with Pagan/Viking slant is even more prominent on this EP. Where many bands, the longer they exist, adopt their own sound and let go of their most obvious influences of their musical examples, this seems to be exactly the opposite with Runespell. The music has more and more in common with the mid-era Bathory and Graveland. The latter in particular seems to be gaining an increasingly prominent influence, it is almost impossible not to draw some comparison here with Graveland’s ‘Memory And Destiny’ (2002, No Colours Records). But it does sounds way more like a homage than just a simple imitation, so I don’t see this as anything negative at all, on the contrary: Pagan Black Metal is increasingly becoming a dying phenomenon, let alone if it is performed as well as Nightwolf does.

This EP, with three tracks and acoustic outro, clocking in over 30 minutes, is one of Runespell’s best works as far as I’m concerned. The slightly brighter sound fits the epic music perfectly and makes the whole thing a more memorable experience. The melodic guitar leads propel the heroic epic to unprecedented heights, with Nightwolf’s raw vocals further fueling the wariness.

The epic greatness of Runespell takes on such proportions that we can slowly argue that the pagan gods in Agard will accept Runespell as one of their own. In any case, Runespell is proving more and more to be one of the best Pagan Black Metal acts of the moment. (FelixS)