Trance of the Undead – Chalice of Disease 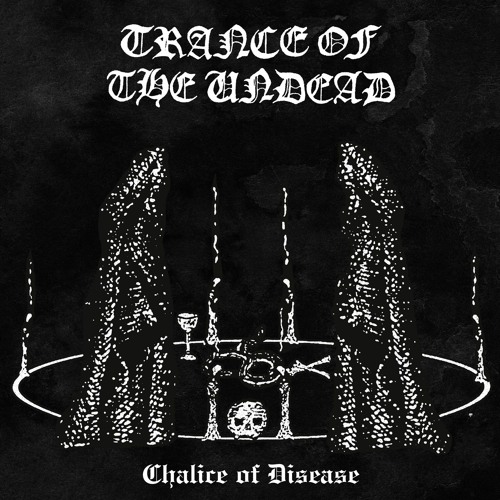 There’s nothing better than the excitement of discovering a new band (or release) that can speak into you in high volumes. Trance of the Undead are storming from Brazil and “Chalice of Disease” is their 5th release. So glad that I discovered them even late!

This full length came out as self-release in 2020 but inevitably it caught the attention of Iron bonehead productions that announced a vinyl/cd release for the 10th of September. The album consists of 7 tracks that keep you hooked from the very first notes without giving the feeling of a single filler included. From the very first notes you can-definitely- hear the early Demoncy influences with an aura of the mighty Von and a bit of Void Meditation Cult. The few keys here and there after the intro are giving the absolute occult touches needed to make this journey into darkness into a spiritual purging. The lo-fi production is the perfect fit for their music-yet abysmal and organic-and the cavernous reverbed growls are the visualisation of the beast. Have in mind that Trance of the Undead are an one man project and that’s a significant point for me of the creator’s vision.

As i already mentioned above there’s not a single filler within these-almost-forty minutes of pitch black invocations and that gives this release a mantric repetition that set your mind and soul into a ritual trance. You can hear this perfectly in tracks like “Grave Sacrament”, “Sic Transit Gloria Mundi”, “Archaic Knowledge” and “Chalice of Disease”.

Without a doubt one of my favourite releases for 2021 and already a regular resident on my playlist. If you’re a true worshipper of obscure and abysmal Black/Death Metal make yourself a favour and support this release. (Nyogtha)

Trance of the Undead