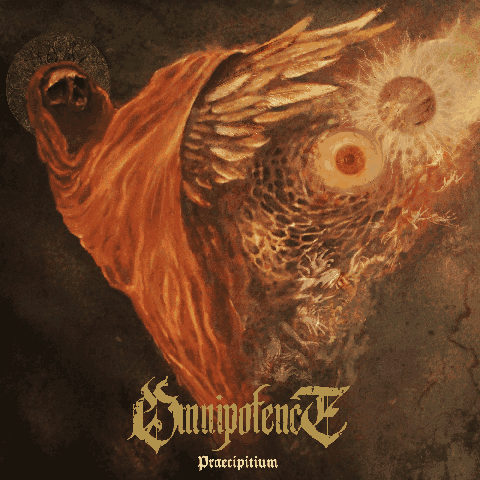 When something’s released through Iron Bonehead Productions, a certain curiosity always rests upon it. The reason being that this record label never failed to give an engrossing release. With that being said, let’s start talking about another fascinating release from the label by a Canadian Blackened Death Metal band called Omnipotence.

Their debut full length album consists of 5 tracks and all of them are fully susceptible of creating a divine trance journey for the listeners. The album’s composition was full of 90’s opaque Thrash Metal riffs, rimy melodic lead guitar works and bestial blast beats. And somehow it all blended together in a really daedal way. The ambience of 90’s Norwegian Black Metal bands such as Immortal and Darkthrone can be sighted all throughout this album. Production quality is really modernized as in it scream the new era of Black Metal. The production reminds the lisyeersy of Mgla and Murdryck’s releases.

Oh, shoot, I forgot to talk about the grisly vocals. The screams sounded like someone was shrieking beneath the sepulcher and it has circumvented the firma and ascended over a crisp berg and mused the earth. The “Echo” used in the vocal is totally capable of holding the tenor of Black Metal. The riffs were on point. No kind of overplaying was heard.

In my opinion the most prepossessing composition was “The Emptiness That Breathes”. The song was incepted by a punchy riff and a melodic guitar work. This kind of lead work is usually used in Ballad Rock songs. The tenebrous tone of the ballad rock lead work may sound a little similar to a lot of black metal bands, yet it wasn’t a mimic but totally a creative playing. This song was a adroit illustration of how Black Metal blends murk ballad Rock lead guitar works with savage riffs.

In some places of the album the vocalist and the guitarist is hugely fulcrumed by Melancholic/Funeral/Depressive Black Metal bands. It really does create a unique atmosphere for the album. The last and the longest track of the album is called “Beyond The Boundaries Of Being”. Despite being such long, because of the outstanding composition it doesn’t get boring at all.

At last my personal review that the members are really stark and it reflects clearly on this album. This is a really interesting and a must-hear album. Don’t miss it. (Akib)