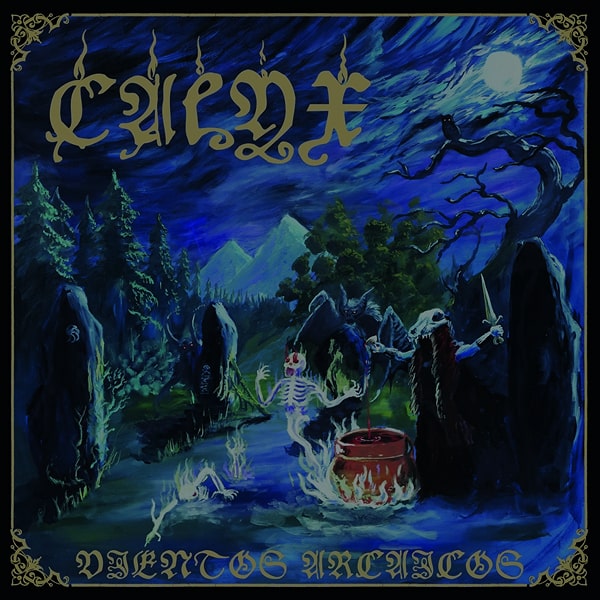 “Who is this guy?”, you may be asking yourself. Stick around, you’ll find out, I promise. To get you started, though, here are 3 things I believe to be facts:

And now, on with the show…

Calyx. Ever heard of them? Yeah, me neither. Thankfully, there it was sitting in the promo bin (aka online shared folder) with a description of “medieval black metal” with “folkish elements” and a focus on Spanish history, put out by Iron Bonehead. Once you get to know me, you’ll know that I had to muster every last ounce of discipline in my body to not just buy it based on the description alone, but rather actually, you know, listen to it first. So I did. Two-word review: holy fuckballs. I didn’t penalize them for starting off with another – yawn – 1-2 minute intro (why, why do bands have to do this?!) – it thankfully drops right into “La Venganza de Las Brujas,” which serves to burn your face off and drop you headlong into the epic tale that’s about to happen. Oh before I forget, the entire album is sung in Spanish, so fuck if I know what they’re saying.

Anyway, rather than creating a classically icy or grim atmosphere, Calyx opt to go the gloriously triumphant route. Listened-to front-to-end puts you in the movie, so to speak. This movie just happens to look like Braveheart fucked Don Quixote. And there is no let-up. If the first track doesn’t create an urge to wield a broadsword into battle, surely the galloping blackened thrash (think: D666’s neighbor) of “Asedio Infernal” will do so. And I dare you to not break your neck headbanging about 2/3 of the way through that one. Now THIS is black metal!

Calyx refuses to be pigeonholed though, whether it’s the viking-like battle of “La Sima” with its relentless pounding of the skins, or the tremolo-soaked NWOBHM licks during the title track, or even the Middle Eastern-by-way-of-Nile sea change back during “La Venganza…”, Calyx keeps things incredibly interesting throughout, despite a (very well-executed) reliance on the classic vibrato-sound of the tremolo riff. Then they go and end on a high note with “Loarre,” featuring my favorite riff on an album full of them, calling to mind classic mid-paced Immortal. If I HAD to gripe about something, I can’t. It’s a borderline perfect album.

To summarize, in a very crowded sea of Dissection/melodic black metal clones, there’s something about Calyx that stands out as unique. My resolve was gone, I succumbed; Calyx won. I bought the album and easily have played it a dozen times already. And I don’t see it losing steam as the year progresses. If you’re a fan of epic black metal, and really, why are you reading this if you’re not, I implore you to check this one out, it’s a keeper. Until the next time… (Crimson Death)