Drowning The Light – The Ghost Of A Flea [EP] 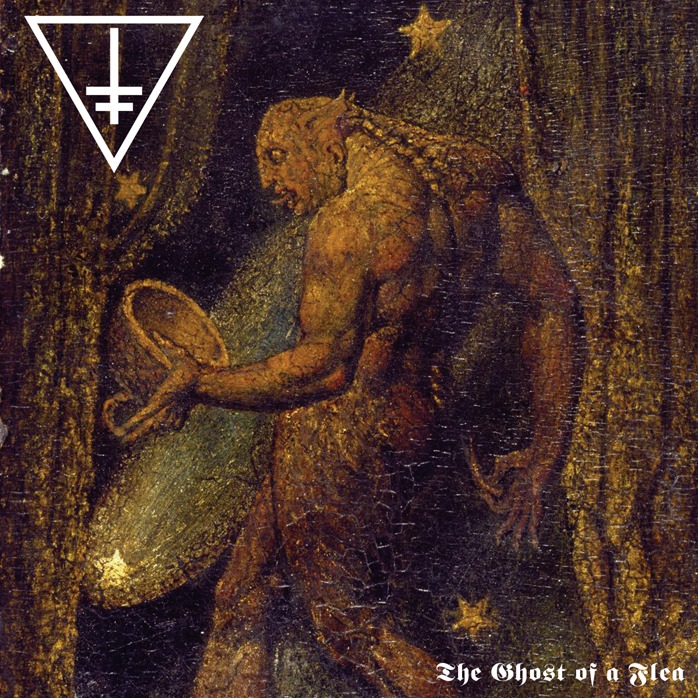 In a span of a few days (8th, 10th and 13th of January), Azgorh and his Drowning The Light brought us no less than three new releases. A full-length album and two EPs, of which this ‘The Ghost Of A Flea’ is the second. Whereas the ‘Lurker Of The Void’ EP and the ‘Haunter Of The Deep’ album had a clear connection to each other in terms of sound (and to some extent, theme), ‘Ghost Of A Flea’ is a completely different experience.

This 16 minute clocking EP is inspired by a painting of the same name by William Blake. A seminal figure in the development of various forms of art in the Romantic Age and mostly known for his intellectual poetry. Even today his work is considered among the best literature ever written. But, he also had a darker side in which he would regularly conduct a séance with, in most cases, his best friend, the painter John Varley. During one of those séances in 1819, in an attempt to summon the spirit of a mythological creature, a flea appeared before them. The flea told the duo that it was purposely made smaller to restrain its power for it would otherwise be a too mighty destroyer. Blake would sketch this creature, this flea, that appeared to be partly human, partly reptile and, above all, partly vampire, and would later rework it in the painting that is now used for the cover of this new Drowning The Light EP.

Probably because of the thematic nature of this EP, Drowning The Light sounds old-fashioned vampiric again. The somewhat dreamy Black Metal of ‘Haunter Of The Deep’ and ‘Lurker Of The Void’, while fitting well with that oceanic theme, have been jettisoned on this. For those who have difficulties to connect with that mellower side of Drowning The Light, this EP is all about Azgorh’s sharper edged Black Metal with its distinct melodic backdrop. Where the occult and vampire theme marks a kind of back-to-basics for Drowning The Light, the music undoubtedly does too. A new twist or musical experimentation is not very much for Azgorh anyway, but on an EP like this, that would also be completely out of place. On ‘The Ghost Of A Flea’, it is again unadulterated enjoyment of the Raw Black Metal we have known from Drowning The Light for so long that it seems to have become timeless by now.

In fact, where Drowning The Light was accused of being unoriginal and simply copying the ambience of mid 90’s Black Metal, things have taken a remarkable twist. Azgorh has been able to shut up his critics from those early days and by simply moving on, keeping his own musical path, he turned the tables and is now one of the leading acts and a true inspiration for many other musicians in the genre. And where William Blake was believed he was onto something far more sinister then met the eye, Azgorh himself has certainly raised himself a far more sinister vampiric creature with Drowning The Light.

Basically this new EP sounds like the many Drowning The Light EP’s that were recorded during the late 00’s and early 10’s. A lot of those recordings were eventually released as separate 10” EP’s, which would be a treatment that would suit ‘The Ghost Of A Flea’ extremely well. But instead it is to be expected that Iron Bonehead Productions will press this EP together with the ‘Lurker Of The Void’ EP on a regular vinyl record, just like they did with some previous EP’s. Either way, I am eagerly waiting for both EP’s to appear on vinyl and add them to my Drowning The Light collection.