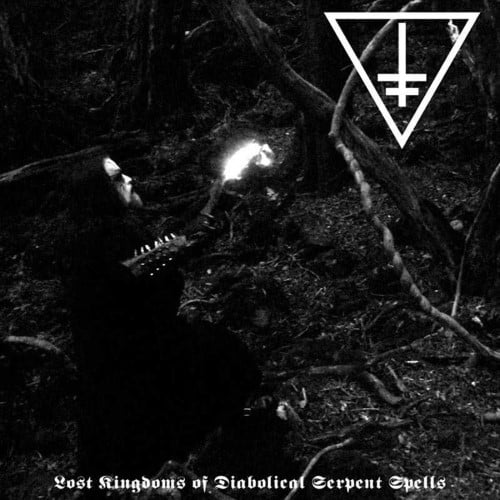 The last two or so years, Dark Adversary Records, run by Drowning The Light mastermind Azgorh, has been reissuing quite a lot of his older material. Some of his older albums saw the dark of night again after many years but there is a good share of compilations that hit the market, consisting out of a selection of Drowning The Light’s many demos and EP release. This one, that was released earlier this year, is one of those, comprising three demos: ‘Diabolical Winter Spells’, ‘Rise Of The Black Serpent’ and ‘Lost Kingdoms Of A Dark Age’. Hence that mouth-full of a title for this one compilation.

Opening five tracks are taken from 2012’s ‘Diabolical Winter Spells’ demo, which originally saw its release through Versets Noirs and was later also released on cassette tape and CD by Dark Adversary and on a 10” EP by Obscure Abhorrence Productions. So these recordings are not new and I guess most loyal Drowning The Light adepts will already have these songs – on one format or another.

Next four were taken from ‘Rise Of The Black Serpent’ demo tape from 2010 and had its initial release through Adverse Order Music and was, as far as I am aware of, only released on cassette tape.

Last four tracks were originally released on ‘Lost Kingdoms Of A Dark Age’ in 2013 by Obscure Abhorrence Productions as a mini CD and on a 10” EP. In 2015 they were re-released by Canadian cult label Tour de Garde. So, just as ‘Diabolical Winter Spells’, these songs will most likely already be in the possession of the band’s followers. These recordings, by the way, were never released or marketed as a ‘demo’ but as an EP instead, so I was kind of surprised to see them mentioned as such on this release.

Music wise, for reasons unknown, they are presented in a non-chronological order, but they kind of fit together well. Compared to the band’s more recent material they are a bit rawer in sound, but still very melodic and leaning on a thick layer of Dungeon Synth-like atmosphere created by keyboards. Though it already has all the characteristics of what Drowning The Light stands for and grew its cult following upon, it feels like these songs are part of a transitional phase. A stepping stone, if you will, to the levels of song writing and musical ingenuity, that we know Drowning The Light from today. That ingenuity is not to be found in intricate musicianship or other overly sophisticated craftsman ship, Drowning The Light was always based on simplified and back to basics aesthetics of the Black Metal genre. Focussing on raw sounding riffs and moody keyboard passages instead of grandiose bombastic walls of sound, creating a haunting and slightly unsettling ambience, that is felt throughout the full back catalogue of the band.

It is in that light we have to listen to these recordings, and basically, that is what demos are meant for to begin with. Exploring musical possibilities and perhaps even new territories. I loved each of those recordings, not only for their great songs, but also for their historical value. As an early adopter, I personally have been following the band for many years, yet I had not heard the ‘Rise Of The Black Serpent’ demo before and so this compilation provided an interesting listening session. For those who don’t have don’t have the original 10″ EP’s, cassette tapes or CD’s on hand, this is a good way to kill three birds with one stone.