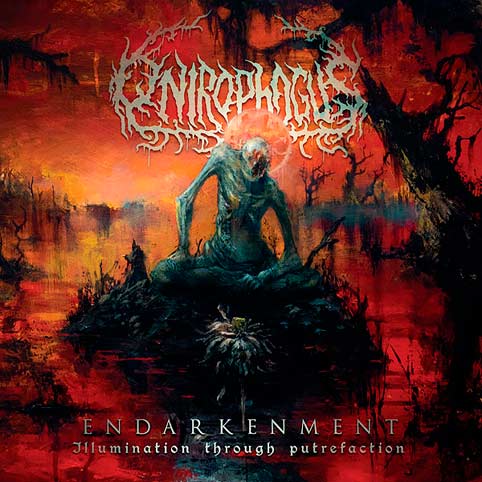 It’s one thing with good Death / Doom: Either it’s just extremely slowly played and downtuned Death Metal, or the elements from both styles are interwoven in such a cerebral way that you can’t access the music at all. Bands like My Dying Bride, Novembers Doom, Mourning Beloveth or My Silent Wake have shown how it can be done correctly, and despite all their differences they have one thing in common: Their music lives and breathes, oscillating from sadly beautiful to vicious aggression and back again to complete hopelessness. All newcomers have to be measured against this class and most of them go down without mercy. But not so the Spanish Onirophagus with their second album “Endarkenment (Illumination Through Putrefaction)”.

This already starts with the production: It doesn’t feel as viscous as you find it with many other genre representatives, but is dynamic enough so that the individual parts can be clearly distinguished from each other. Aggressive parts also work that way, the melodies get enough depth to really work and spread enough melancholy, which is partly beautiful to cry about. And for the first time in a long time, it’s hard for me to put any track above the others. Despite its long playing time of about an hour, the album seems very compact and self-contained.

The atmosphere is very deep and rarely enough have I experienced such a song structure – and then for thirteen and a half minutes – that creates so much tension from the beginning. The only drawback: the drums, which generally seem a bit too thin as soon as the tempo is increased. There is definitely room for improvement. However, the tempo changes work really well and give the album exactly what I wrote in the introduction: “Endarkenment” breathes! And thankfully over the entire album distance.

The 23-minute and title track “Endarkenment” takes it all to the extreme. Not only does it combine all the band’s strengths and create a microcosm all of its own, it is also one of the best tracks in the genre: the aggressive parts in particular seem so evil and intimidating that it is almost a shame that they only appear so rarely. I listened to this track alone in continuous rotation for hours, especially because of the acoustic middle part and the pure Doom part that follows it.