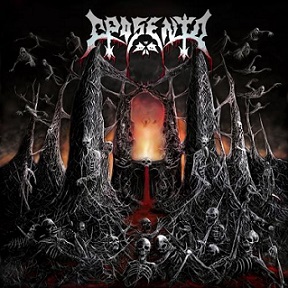 Although they are just reactive again since 2 years ago, the history of Spanish Death Metal band Aposento goes way back…to 1990 to be precise. After releasing 2 demos and one EP in the first period of their existence, Aposento resurrected, as said, in 2012 and released an EP through Spain Death Metal Records immediately. The EP featured 2 new songs (in Spanish), 3 re-recorded ones (in English) and one cover (Death’s “Pull the Plug”). This new album is also in Spanish, but with track titles like “Mutiladora Genital” and “Inquisidor de un Falso Profeta”, you will probably understand they are not singing about the local Burger King, their Twister fries and a strawberry Milkshake to go. The Death Metal played by Aposento is quite in the early-1990s US Death Metal vein. I especially hear some really early Cannibal Corpse (“Eaten back to Life”, “Butchered at Birth”) or Morbid Angel (“Altars of Madness”) in some of their deteriorated compositions. For example the beginning of “Hijos del Caos” has a Morbid Angel’s “Immortal Rites” connection, while you can hear some “Eaten Back to Life” (“Edible Autopsy”) drum patterns in the middle of the same track. But also “Mutiladora Genital” and “Sacrilego Consumado” has that same Cannibal Corpse vibe. Although making a choice between the old Cannibal Corpse albums and this new one of Aposento is an easy one, this album has certainly enjoyable moments. (Ricardo)