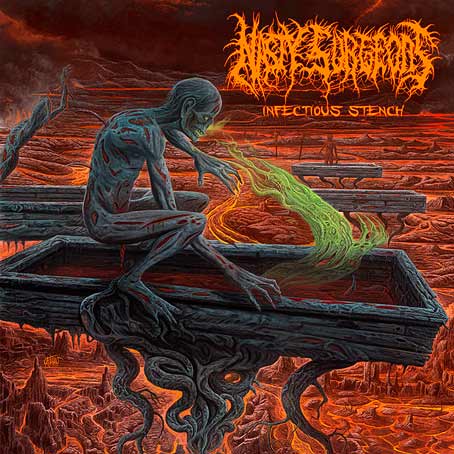 Starting off with an intro that would make Carcass proud, Nasty Surgeons are not shy about showing their influences. Nasty Surgeons take the Necroticism sound, amp up the heaviness and bring a lot of groove to the (operating?) table. Most bands that take influence from Carcass could be lumped more into the goregrind genre but this is firmly planted in death metal through and through. While the first track after the intro, Smell the Carcass, is more groove oriented the title track is when the band really cranks up the speed bringing a barrage of blast beats and thrash tempos before bringing back some groove for the songs chorus. To my ears it sounds like Carcass or Terrorizer mixed with slight hints of Death filtered through the thick and meaty death metal sound common of bands from Spain. The band really manages to be multi-dimensional while still retaining an extreme edge. I like when bands can go from full out blasting to a melodic guitar solo and not miss a beat. It has an old school death metal quality but the modern production reminds you that this is most definitely a 2018 release. This is a no nonsense death metal release that will claw its way into your subconscious. It’s a monstrously heavy album with killer riffs spilling out all over the place and a fantastic gross vocal approach. This is one surgery you will want to be awake for! (MikeH)