Revolting – Born To Be Dead 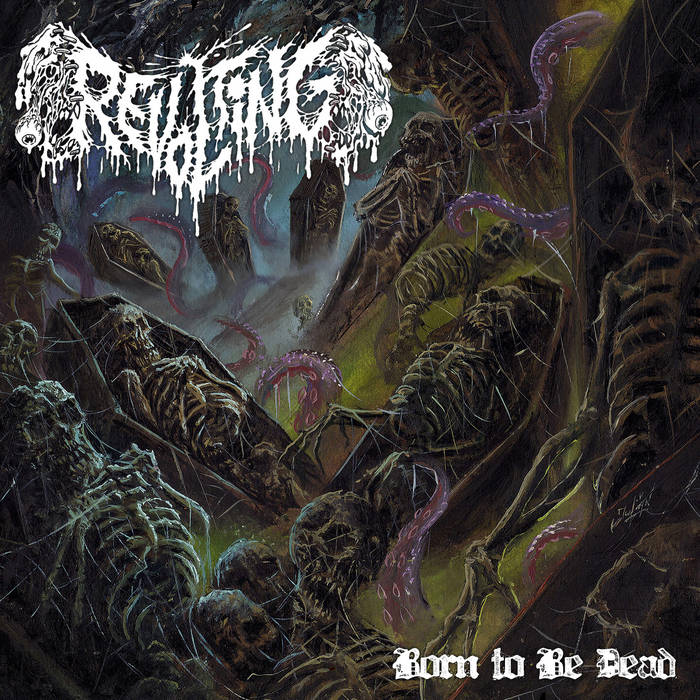 Album number eight for Revolting, one of the many Rogga Johansson starring bands. What can be said that hasn’t been said about Johansson and any of his musical endeavours? A quick scroll through our pages at VM-Underground already give you a pretty accurate description on what to expect – if you didn’t already know that.

Our chief-editor reviewed his fair share of Johansson-bands, including Revolting. One of the albums he drilled down to the point that it will not garner the band any new fans, nor would it lose him any, since it is “just Revolting…nothing more, nothing less”. And on an older record he commented on the melodies: “Leave it or come up with a better lead”. With those words already spent on Revolting’s back catalogue, it is hard to come up with anything new.

‘Born To Be Dead’ is indeed just like its predecessors, a decent Death Metal album with a good sound, but in the end largely forgettable. Revolting still is Johansson’s more melodic vessel, yet not to such an extent that it nears the melodicism of the Gothenburg scene. The melodies are mostly simple and not as catchy as they like them to be – or as they are advertised, instead they are fairly simple and even sound quite naive. Vocally it is more of the same as well, Johansson’s vocals are not different from album to album or from band to band, which makes it rather interchangeable; the only thing that stands out a bit (not necessarily in a positive sense) is the Chris Barnes-like squeak in ‘The Suffering’ (how appropriate is that title?). Back to the guitars, they do come up with the occasional nice riff, but it largely remains middle of the road Death Metal.

Without wanting to sound too rough or rude, I can’t come to any other conclusion than Ricardo once wrote. It is just Revolting, or, better, it is just Johansson. It’s not a punishment to have to listen to it, but it really doesn’t do much. Basically Revolting (or Paganizer, for that matter) is the Reo Speedwagon or Journey of Death Metal. Oh, bonus points for the cool artwork, though.