Desecresy – Unveil In The Abyss 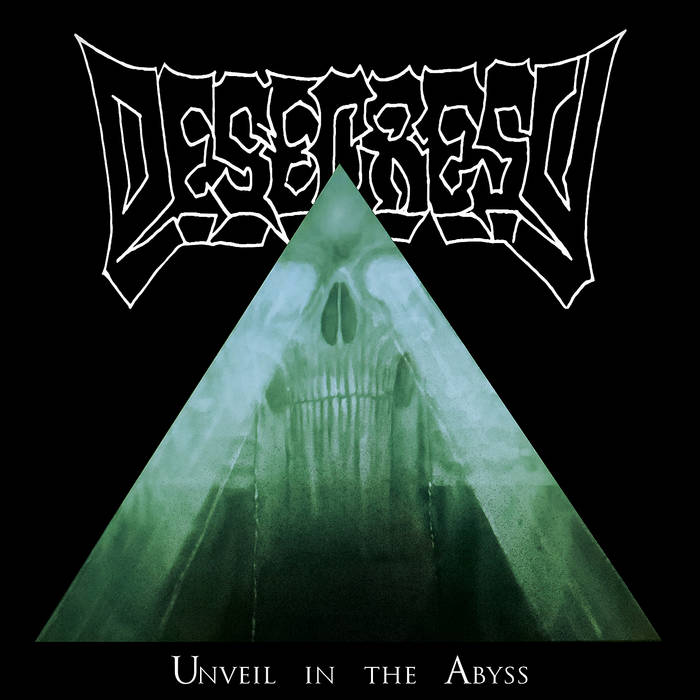 Originally started out as a duo, Desecresy was brought back to a one-man Death Metal playground for Jarno Nurmi, who previously gained some fame in the otherwise quite underrated Finnish Old School Death Metal gurglers of Slugathor. On his own Nurmi pigheadedly continued the band on a steady pace, releasing an album every two or so years and seemingly, making ‘Unveil In The Abyss’ the band’s eight full-length album.

Though none of the earlier albums was really off, Desecresy kind of got stuck in its one-dimensional musical spectrum. The utterly heavy and slow Death Metal with equally deep and guttural vocals and the occasional trip down to Funeral Doom-like territories left only little room for musical experiments. Simply put, Desecresy were always a very decent band, but, honestly, not all too special. The more surprising was its 2022-return with ‘Unveil In The Abyss’, the album didn’t show a very appealing cover, but musically it was finally able to pull off something different. Oh, well, different, Desecresy didn’t stray from its initial path, but this time around it seems things really fell into all the right places. There was never a question about Nurmi’s musical abilities, being able to combine both the heavy and slow Death Metal with decent songs, he had already proven to be a decent song writer. Yet, on ‘Unveil In The Abyss’ that song writing seems just a little step up to Desecresy’s previous work, but the most striking difference is its sound.

‘Unveil In The Abyss’ has just that immensely heavy, crushing sound that I always missed on the previous album. The production is deep and with so much emphasis on the low-end of its sound that the riffs gets propelled into extreme massive proportions. Finally those strange, Funeral Doom-like minimalist melodies, come to full fruition. In fact, all the elements previously used by Desecresy come out so much better with this sound update. Now the band is able to compete with most of the other bands in the genre and might even appeal to fans of Funeral Doom, due to its crushing sound and immense depth.

With its newfound power Desecresy was definitely able to impress me and I am sure it will appeal to fans of bands like Krypts, Stench Of Decay and Dead Congregation. Still not convinced to give ‘Unveil In The Abyss’ a listen? Imagine a delirious Sunday morning jam session of Incantation and Rottrevore members, well…? Go, Johnny, Go.