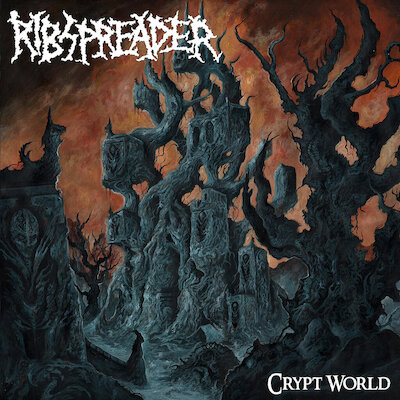 Writing an introduction to Ribspreader is actually not all that easy. There is a lot and at the very same time pretty little to write about Rogga Johansson’s brainchild, one of his many admittedly, but in any case one on which he regularly spends his time. Much of his work is fairly interchangeable, both within the bands’ discographies and between bands individually. This album is from this year’s spring, but was immediately followed up this very summer by album number 10. So still releasing at a tremendous pace, at Rogga & Co.

‘& Co.’ on this album and ever since 2016 is the duo of Jeramie Kling and Taylor Nordberg, who we also see at the Massacre-spin off Inhuman Condition, but also in bands like Deicide and Venom Inc. They joined the band with the ‘Suicide Gate – A Bridge To Death’-album (2016, Xtreem Music), which is in my opinion the best Ribspreader work so far, and another plus is its magnificent Juanjo Castellano artwork.

On ‘Crypt World’ we get more of the same. Groovy, mid-tempo and not very exciting Death Metal that leans more to the American (Massacre) than to the more saw oriented Swedish sound. Something that suits Ribspreader pretty well, but the rawer sound on ‘Crypt World’ is a step back from what we could hear on ‘Suicide Gate – A Bridge To Death’. Despite these minimal changes, we get, almost without exception, all the standard ingredients from the Rogga-cookbook. The chopping riffs, the rather hysterical and a-musical Slayer-esque solos and the primitive drumming keep the band firmly nailed to the ground, but that also means that it never gets any wings to really rise above the mid-range.

As with almost all of Rogga’s work, it lasts only for half an hour, a length that he feels suits his work well. And I wholeheartedly agree to that idea, it shouldn’t take much longer than that. After the half hour, you wonder whether anything of what you’ve just heard will actually stick. Hardly, is the conclusion. Maybe that hip late 90’s Stuck Mojo-riff in ‘Good Hatchet Fun’, but not quite for the right reasons though.

With most of Rogga’s work, you get the idea that he looks at his watch from time to time and sees that it is, say, Ribspreader-o-clock and then takes out his guitar and writes a whole album in one evening. That’s the charm of most of his work, uncomplicated Death Metal with a bit of this and a bit of that, but it’s never more than just a slab of Death Metal good for background music while… cooking?