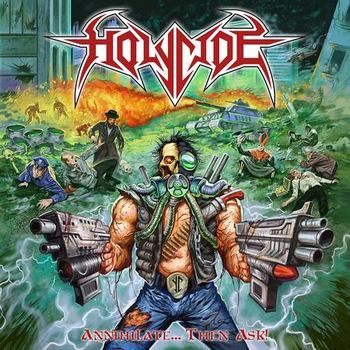 Isn’t that an a tactic for a performance appraisal or an interrogation by the book? Annihilate…then Ask! Well, maybe that is open for discussion, but a fact is, it is the title of the debut album of Holycide. IF you don’t know them, it is the Thrash Metal band fronted by guttural enthusiast Dave Rotten (most famous of his vocal performance within Avulsed). As on the EP the influences stays Old School Aggressive Thrash with Dark Angel, Infernal Majesty, Détente (hence the “Losers” cover) and Sepultura among others. In my previous review I mentioned Dave Rotten sounded like “a lot like the Spanish lost brother of Hardcore icon Roger Miret of Agnostic Front on their “Warriors” and “Another Voice” albums, only a bit more raw.”. There is no difference on this album, so it is definitely a love or hate decision. After a few spins I have to say it was a nice but not groundbreaking listen. It is too good to categorize this as bad or average, but it does lack that final uppercut to grab the listener for good. (Ricardo)