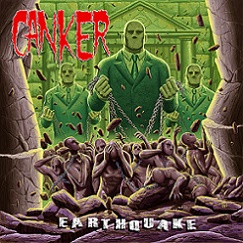 The masses probably aren’t familiar with Canker, a Death/Thrash band from Spain. I wasn’t either till I received and reviewed the compilation “Physical” in 2014. The songs on “Earthquake” have a lot of variation and contains influences of late Death, the thrash of Sepultura and some Nocturnus twists due the addition of synths now and then. But if you listen to the title track, it could be written during a night full of booze and Motörhead. It is almost like every song is different as a song like “Leyla Island” has a lot of middle eastern influences, which gives a Nile-vibe, along with some Sepultura percussion and groovy Chaos A.D. riff. Canker shows man-e-faces (yes, that is a He-Man reference) which may sound refreshing for one person, but tiring for the other. I myself can hear some nice ideas (riffs, solos), I just hope they can be more decisive with the next album. Personally I would like to advise them to stick to the technical Death Metal style, I think it suits them the best. (Ricardo)