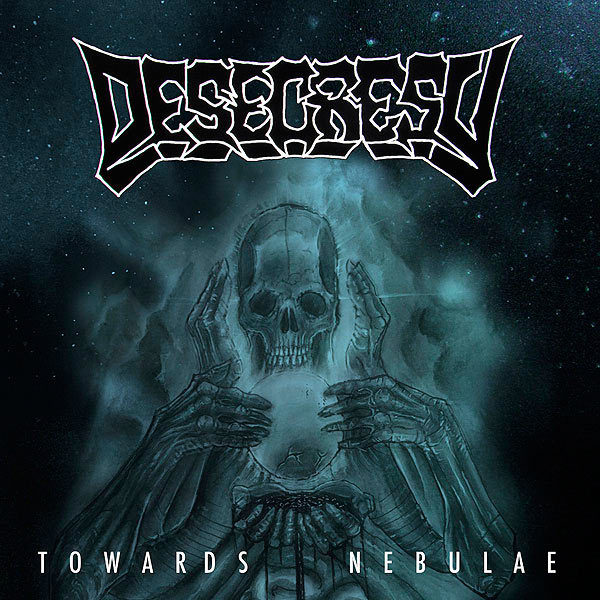 Desecresy from Finland have been consecutively putting out infernal Death Metal albums every two years since 2010 and “Towards Nebulae” is their newest and 6th release.

Lo-fi Death Metal, that sounds like the early 90s Death Metal demo days, this is what Desecresy deliver here across 11 tracks. It sounds very close, I imagine, to what they sound like in their rehearsal space. A sound that is not polished and the heavyness comes more from the feeling of the sound then as a result of studio production. The guitars are very bass heavy sounding and lend an obscure muddy sound to the riffs creating a very thick molasses of death. There are pummeling riffs and melodic riffs entwined with the battery assault of the drumming. This creative yet weird guitar tone is placed on the leads, like its a lost radio signal ping-ponging off different electronic devices in the distance, very different from the usual blistering whammy bar dive bombs. A deep guttural vocal is used throughout the album, it’s very monotone and could have used more variation in my opinion but in terms of evil sounding, it’s like some sort of beast from hell. There is an apparent Bolt Thrower-esque groove woven throughout the album that becomes more pronounced near the end with a more mid to slowed down tempo taking over.

Any FinDeath fan is probably already well acquainted with Desecresy but if you are not, I would recommend checking out “Toward Nebulae”, its a little something a bit off the beaten trail of typical Death Metal. (Ted Gloom)