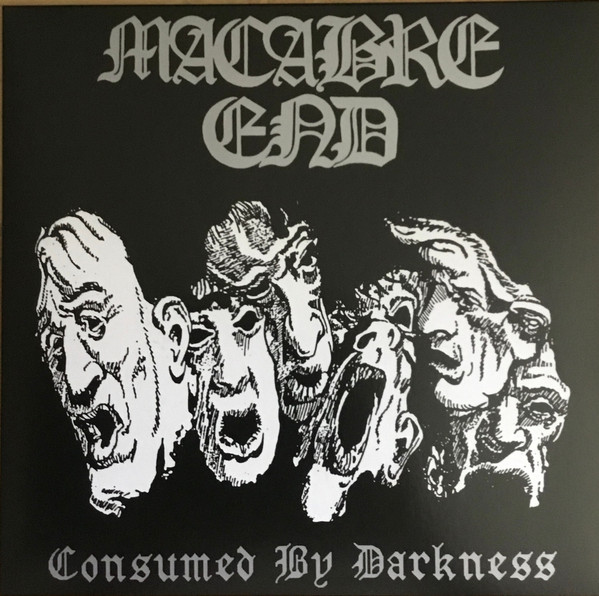 The only Macabre End recordings are the three tracks from the 1990 ‘Consumed By Darkness’ demo tape, released a year later by Corpse Grinder Records on a 7″ EP under the same name. This 7″ EP is one of my favourite items in my personal singles collection and with me many others, over the years these recordings have proved to be of great historical and economic value. Not only were/are the singles sold for considerable amounts of money, many of the more recent (Swedish) Death Metal bands cite Macabre End (and its successor God Macabre) as one of their main sources of influence. These three songs would eventually form the stepping stones for what would later become ‘The Winterlong…’, God Macabre’s sole album, which has reached almost mythical proportions among Swedish Death Metal fans.

If we look into what Macabre End/God Macabre was, at the time, then it is not so much about a story of great success, it is rather one that’s about missed opportunities. Already as early as 1991 the band folded for the first time, only to resurface a few months later, but they failed to follow up on the great ‘Consumed By Darkness’ demo/7” EP. By the time their one and only full-length album appeared, the aforementioned ‘The Winterlong…’, in 1993, the band not only quit for a second time (in 1992), but the musical climate had been changed quite a bit. Black Metal already started to take over the extreme territories of the metal genre, so, imply put: the momentum for (Swedish) Death Metal was gone and the album ended up hardly noticed.

Over the years there was a silent following that kept praising the album’s unparalleled and in the end the band (re)gained some of its well-deserved credits. It was Relapse Records who first reintroduced the ‘The Winterlong’-album (now released without the …) in 2002, a rerelease that included the three ‘Consumed By Darkness’ tracks as well. In the years that would follow, the album would be repressed several times on both CD and vinyl by Relapse Records and Blood Harvest. Ultimately, the band even returned for another go in 2013, which would lead to only one new song (that would be added to some of the ‘The Winterlong’ reissues) and several, mostly disappointing live shows.

But, drilling things down to its deathly core, the ‘Consumed By Darkness’ demo songs had so much potential, that is fully justifies the ‘classic masterpiece’ label. They had so much depth and restrained aggression in their ultimately riff-heavy and very extreme guttural vocals, it was indeed one of the highlights of the booming Swedish Death Metal scene. Not only then, but it still very much is. Yet, it is not only without the pummelling drums, deep vocal attacks and those riffs, ahhh those riffs, but they also knew how to embed a certain melodicism to their songs. It was almost delicately added to the mix of blistering Swedish Death Metal, which in tone, was very much akin to Grave’s 1991 epic, ‘Into The Grave’.

With all that in mind, one of the pinnacles of Swedish Death Metal and a failed mission to bring that to the highest stage, I always cherished these three tracks and while I already own a copy of that 7” EP, I felt the need to also purchase this nicely designed 10” EP version. A demo that undeniably belongs in a series called ’10 Inches Of Death Cult’, because this is definitely Death Cult.