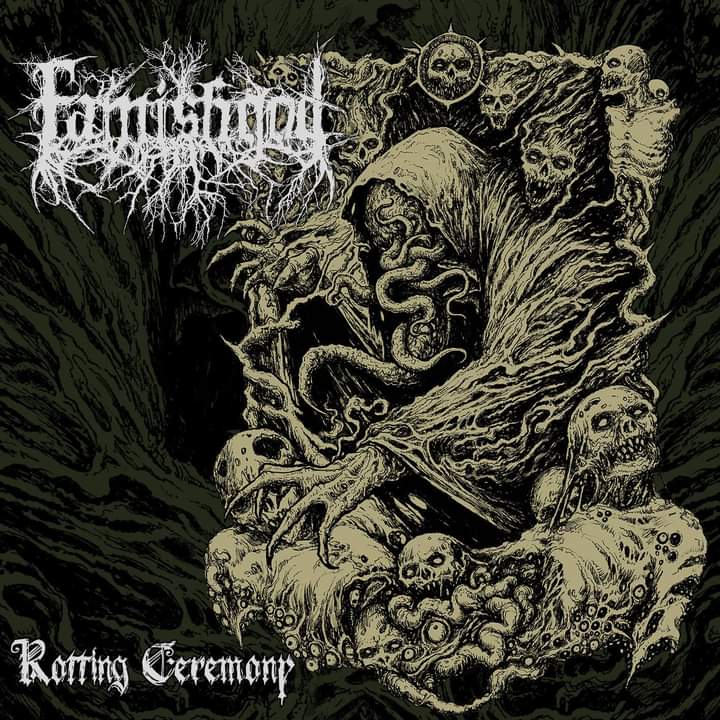 “Rotting Ceremony” is the 3rd offering from the dark depths of despair that is Madrid, Spains Famishgod. Formed in 2014 and having released 2 previous works, “Devourers of Light” and “Roots of Darkness”, all which tie together conceptually with “Rotting Ceremony”, the last album in the trilogy. Each released through Xtreeme music, the label of the bands frontman Dave Rotten.

Most of my listening to this album has been done while cycling through the wind and the rain and that’s been a miserable, punishing experience. As I battled the elements, “Rotting Ceremony” provided the backdrop. Horrendous doom induced noise. Vocals that sounded as if they were coming down from the storm clouds as the drums and death drenched guitar pushed me on through the elements.

Passages that were sounding almost out of tune and out of time, twisting my mind to the brink of dread. Clean guitar melodies drip in and out then run into the more unsettling melodic passages before completely dropping only to return with crushing dominance. Dave Rotten’s vocals being the equaliser for me, this record wouldn’t have the same atmosphere without them.

Deep fall is an absolutely savage performance, especially the vocals that are so insane that it jars you your core. It’s horror in its own right, the atmosphere keeps pushing the light out of everything the sound touches. There are also some almost classic guitar harmonies in “Crystal Palace” and closer “Earthly Slavery”. Famishgod are a band I would like to see live, looking at the stage image (which you should check out as its cool as fuck) and concepts explored it would be a theatrical experience, reminiscent of portal. Good company.