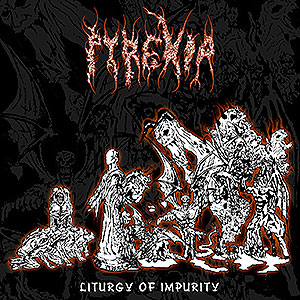 Around the 90’s American Death Metal bands had a real special thing going on. Other than their European counterparts they were much more vile and brutal. Especially New York had an incredibly vital scene with bands like Suffocation, Mortician and Cannibal Corpse (before they moved to Florida). These bands had a very aggressive punch and otherworldly low growls, were less aimed for murky atmospheres and melodies but most importantly, they were into deep grinding grooves and overall technical savagery. This also made them stand out from their fellow country mates like Obituary or Morbid Angel, who had a totally different background and sounded distinctively different.

Below the surface of these very successful bands, there’s a whole bunch bands that has gotten less attention but were equally good and important for developing the genre. One of those bands is Pyrexia. With their debut album ‘Sermon Of Mockery’ they delivered a massive record and scene classic. But before that Pyrexia demoed around and materialized three tapes of pretty good Death Metal.

On this 10” EP out of the 10 Inches Of Deathcult series, we’ll find the ‘Liturgy Of Impurity’ demo from 1992. A four-track tape which sounds remarkably good, even by todays standards; keep in mind that this was an actual demo and celebrates its 30th birthday this year (writing in 2022)! Musically it is not much that you wouldn’t expect, especially not because three out four tracks found their way to their aforementioned debut album. In case you are not much familiar with ‘Sermon Of Mockery’, you can, in popular terms, imagine this to sound like Suffocation with Chris Barnes (Cannibal Corpse-era) vocals.

Like the other parts of this nice 10” series it is released with an inlay with a collage of old flyers and pictures and the original demo-cover. It is always fun to look at those flyers and drool over those great concert line-ups. In this case with Suffocation, Incantation and other great and almost forgotten bands like Human Remains and Psychosis. All in all a nice monument to early Pyrexia and their part of helping shape the Death Metal scene as we know it today. (FelixS)