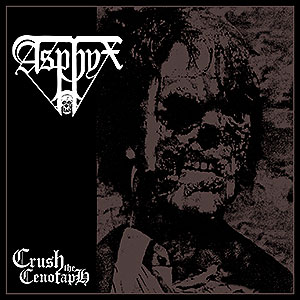 During the late 80’s and early 90’s the Dutch Death Metal scene had a lot of great bands to offer. Many of those bands recorded full-length albums and gained their fame in their respective careers. But before that there was a very lively demo-scene. It was during these days that many bands found their creative heydays and helped shaping the sound of (Dutch) Death Metal.

One of those bands that were heavily tape traded was Asphyx, a band that’s being hailed as one of the best Death Metal bands to come out of The Netherlands. Alongside Gorefest, Sinister and Pestilence they were defining something that would later be called the Big Dutch Four of Dutch Death Metal.

Out of the hand of early recordings, this ‘Crush The Cenotaph’ might be the most iconic. After the necessary line-up changes they had a band together that was able to record a demo that had the quality to still has an impact even over 30 years later. It also marks one out of the two old recordings with Theo Loomans on vocals before being replaced by Martin van Drunen (only to return half way the 90’s to record ‘God Cries’ and ‘Embrace The Death’). Opposed to the trademark Van Drunen-vocals, Theo has a deeper and rougher growl, which fits just right in the equally rough recordings. Hearing these tracks now, it comes as no surprise that they were soon picked up by Century Media to record their first full-length album (‘The Rack’, 1991).

None of the tracks hold many secrets, as all four of them have been re-released a few times over the past few years, either as bonus tracks on album reissues or various demo compilations. But this nice 10” EP (with an etched Asphyx-logo on the B-side) is a well-deserved homage to one of Dutch’ most important early Death Metal recordings. (FelixS)