Necrophiliac – No Living Man Is Innocent 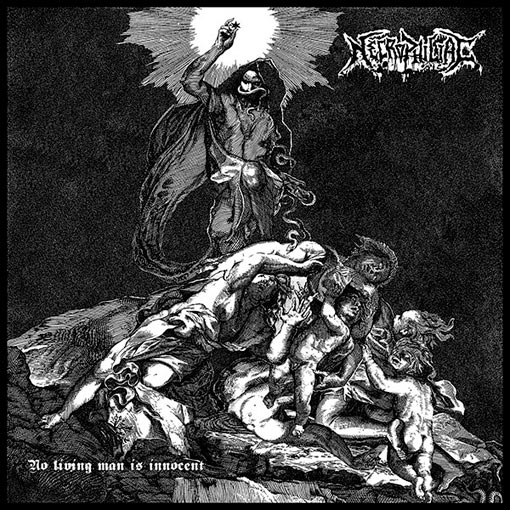 Necrophiliac was originally formed in 1988, based out of Spain and released “Chaopula-Citadel of Mirrors” in 1992, which is considered by some an OSDM gem (and also because of its trippy/oddball cover art) before splitting up in 1993. Reformed in 2016, putting out a compilation album that year and now, 28 years later, released their second LP “No Living Man Is Innocent.” Cover art created by Artem Grigoryev, reminds me of a Gustave Doré illustration.

To reform over two decades later and have a minor change in lineup, this album is quite good for being off the grid for such a long time. My only real complaint is the production aspect of this album. Yes, there’s some polished parts to it but there’s also flaws when drumming over laps other instruments, even a freaking solo on one of the tracks gets drowned out by percussion, check out “Hunting Humans” if you need proof of what I mean. There’s good parts and some parts that seem unnecessarily drawn out, considering this album is 9 tracks, a bit over 55 minutes, with two of the tracks alone at over 8:30 each. I like intros, but you should either have a long intro with an abrupt end or quickly go into the song, then have a slow paced outro; don’t get greedy and do both, especially on multiple songs.

On the positive note, Bongo on vocals can still deliver raw, malicious growls that range in pitch, getting lower or have minor shrieking on some parts. I like the teaser track featured before release “Kill All, Burn All, Loot All” which immediately goes into the track without a long intro, but still has its drawn out parts and a sweet solo at the 3:46-4:06 mark “GodBundy” is a good track based off notorious serial killer Ted Bundy, has a black and white music video to go with it featuring the band playing with Ted Bundy images projected in the background behind them. I do like this album, wish some things could be adjusted but still a great album for a band that’s been a long time hiatus. (Tori Belle)