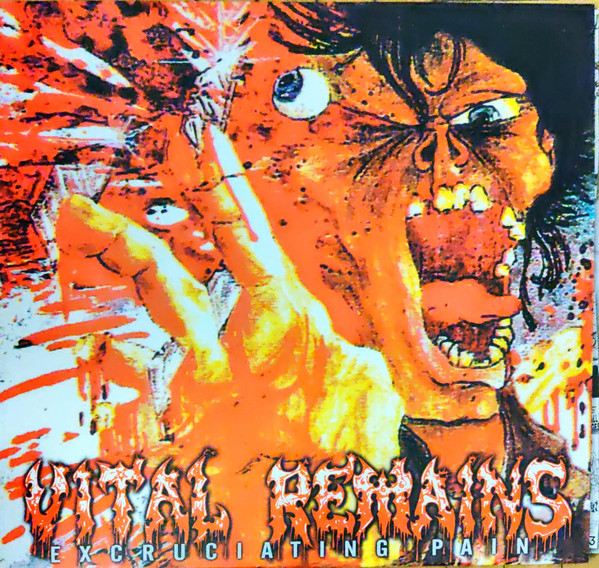 One of the most underrated American Death Metal bands might be Vital Remains. Sure, they have a loyal fan base, but I’ve always felt that the band never reached their full potential. Vital Remains always had some chatter in their line-up and is often inactive for long periods of time, the last album, ‘Icons Of Evil’, being from 2007, for instance. Long before the period when the band released its most iconic (of evil) albums and even Deicide’s Glen Benton was part of the band, Vital Remains worked down the standard path of releasing demos and a 7″ EP as a run-up to their debut album. The widely acclaimed as their best, the ‘Excruciating Pain’ demo from 1990, ended up on this 10″ EP, in the Xtreem Music released 10 Inches Of Death series.

Despite not yet finding the somewhat more balanced sound of the later albums on this second demo, it is already very clear that the band is destined to take the lead musically in this new genre. Basically, ‘Excruciating Pain’ is a clinic in Old School Death Metal, its downright bloody (literally) and evil Death Metal knew very few equals at the time.

The slightly muffled sound gives the chugging riffs extra power and that relentlessly pummelling force takes the biggest piece of the cake. Both drums and riffs aren’t all that intricate or complex, but they are doing what they were set out to do: beat the shit out of your ears. Listening to the last few Vital Remains records, there is really very little that really compares to these early recordings. Contemporary Vital Remains is an entirely different band, with a different musical direction and a completely different sound – extremely good at what they are doing and their own respect, but no longer comparable. This is Death Metal stripped down to its energetic and violent core, no Carl Orff or The Passion Of The Christ intros, just going straight into those great songs with such a sense of urgency that is basically only heard on those late 80’s and early 90’s recordings.

If you enjoyed the band’s first album, the Deaf Records released ‘Let Us Pray’, then this demo is particularly interesting to check out, just to experience the extremely high quality the band already had during these very early years. The slightly rawer sound is actually further enhancing that evil vibe that so many of the great demo-stage bands used to have. Although these tracks were available before, on the Wild Rags Records released reissue on CD in 1995 and on the ‘Horrors Of Hell’-compilation via Century Media (together with the band’s ‘Reduced To Ashes’-demo and the ‘Black Mass’ 7” EP), I think it’s only right to keep bringing these songs to attention. Why? Pretty simple: ‘Excruciating Pain’ is most definitely one of the best ever Death Metal demos.