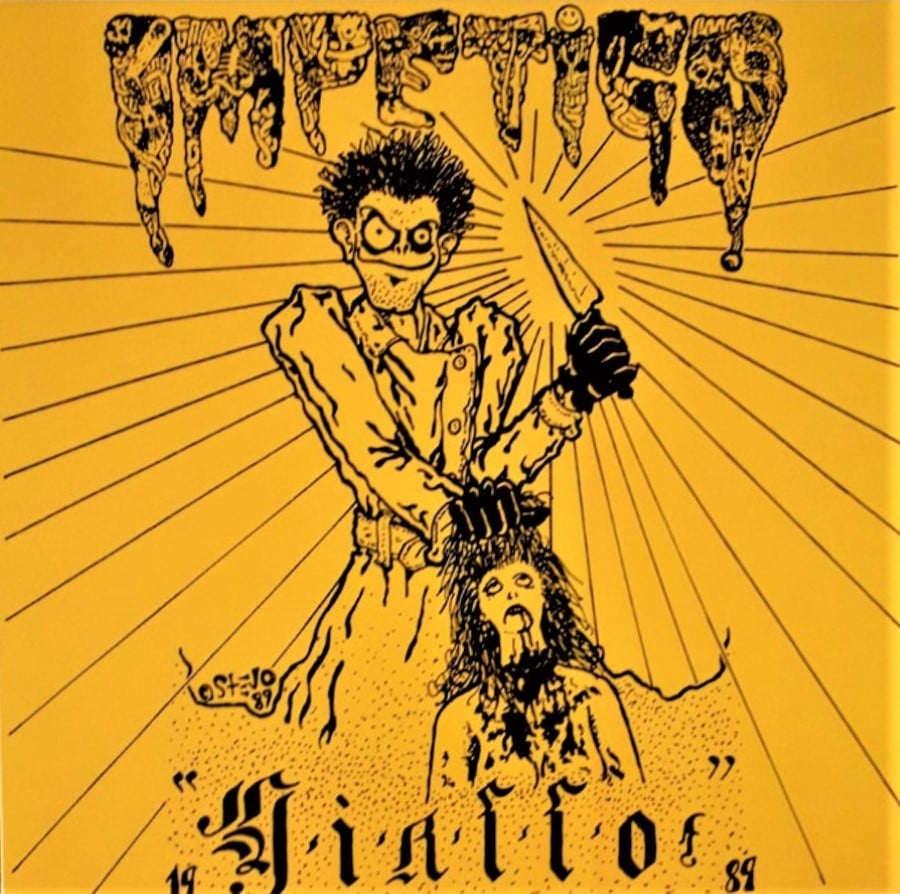 ‘Giallo’ is basically where it all started. Although ‘Giallo’ is not the first Impetigo recording, it was preceded by the 1987 release ‘All We Need Is Cheez’ demo tape, but it was actually this nicely yellowy designed demo tape that marked the real start of the band that would go on to grow to legend status in the years that followed.

When it comes to influential bands to the extreme metal scene from around the turn of the 90’s, Impetigo should definitely be mentioned. Right behind bands like Napalm Death, Carcass and Terrorizer, Impetigo’s influence of the Death Metal/Grindcore scene is equally invaluable. Pretty much anything that can be labelled as Goregrind is more or less been inspired by Impetigo’s fresh take on the genre. From such genre giants as Exhumed, Last Days Of Humanity, Cock And Ball Torture and Rompeprop to more underground acts from those early days such as the massively overlooked Filthy Christians (it is almost impossible not to think of Filthy Christians when you hear that rabid barking vocal attack in ‘Heart Of Illinois’).

So, ‘Giallo’ is a downright classic and a hugely influential demo tape. Of course, it sounds raw and the songs are quite rough in nature. But anyone who listened to ‘Ultimo Mondo Cannibale’ will recognize all the songs, as all those demo tracks ended up of that classic debut album from 1990 (originally released by Wild Rags Records). These demo tracks do not only sound a little grittier, some of them also appear in a rudimentary form as they would resurface rearranged on their first LP, or even partially rewritten. But, their trademark, almost swinging kind song writing, with loads of tempo changes and quirky vocals shines through, even when they sound this harsh (not that ‘Ultimo Mondo Cannibale’ sounds that polished) and embryonic. While not fully developed yet, the band’s intentions are already getting clear: those dynamic changes in pace, clear rumbling bass, sudden bursts of chaotic blast beats and those so recognizable vocals of Stevo would all merge together into what would become the band’s musical DNA and clear a definite blue print for hundreds of bands that would appear in the decades to follow.

The fact that the band’s influence is still being felt in today’s extreme metal scene is only remarkable since Impetigo has only released two full-length albums and a hand full of short plays, but that is all the more indicative for the band’s musical vision. While these tracks were re-released several times over the past three decades, this is the sort of release that definitely deserves a spot in the ’10 Inches Of Death Cult’-series.