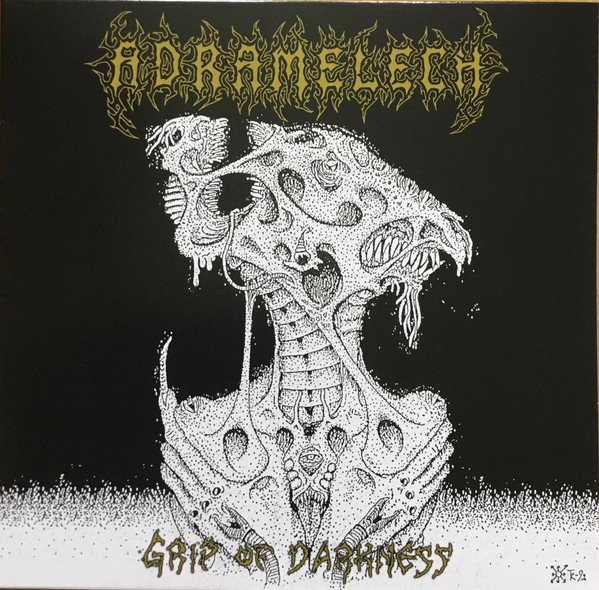 Finnish Death Metal, or ‘Finndeath’ as they like to call it, always had something special compared to bands from other countries who had a lively Death Metal scene. They often had a crushingly grinding sound but at the same time had the outstanding musical talent to write songs with stunning complexity. Around the turn of the 90’s bands like Demilich, Demigod, Funebre and Purtenance helped shaping the scene that got much praise over the last few years and finally got the global recognition it deserves.

Another one of those bands is Adramelech. A band that released their first demo in 1992 and got reissued on this 10” EP by Xtreem Music’s ’10 Inches Of Death’-series. Though not being the most prolific band from the land of thousand lakes, Adramelech also has this distinguished Finnish sound: a gritty buzzsaw-tuned guitar, immensely guttural vocals and a technical approach that was not much unlike the other Finnish bands from that time. When a comparison is needed, Adramelech finds itself somewhere between Purtenance and Demigod with an Abhorrence sound. No, not too original, but pretty well executed and with the right raw and dry production. Something that they would further develop and became their standard on later releases.

And although this is a nice demo, they still lose out to most other Finnish bands. Pretty much outshined by many in terms of complexity (Demilich), heaviness (Purtenance) or song writing (Demigod). They were also against the times, their debut album (‘Psychostasia’, released on one of Xtreem Music’s forerunners, Repulse Records) was released in 1996, a period in which Death Metal had long been on the decline. This combination of being just a little more standard and not having the right timing made Adramelech not really been able to stand out.

Not having any illusions that this 10” EP will shift public opinion or in hindsight gives Adramelech or more prominent position in the history of Finnish Death Metal, a reissue of this demo is still very much in place as it unmistakably is a piece of that once great scene. This reissue comes with an etched B-side, which looks great, but to complete the ‘early works’-concept, adding the ‘Spring Of Recovery’ 7” (Adipocere Records, 1992) would have been a better idea. (FelixS)