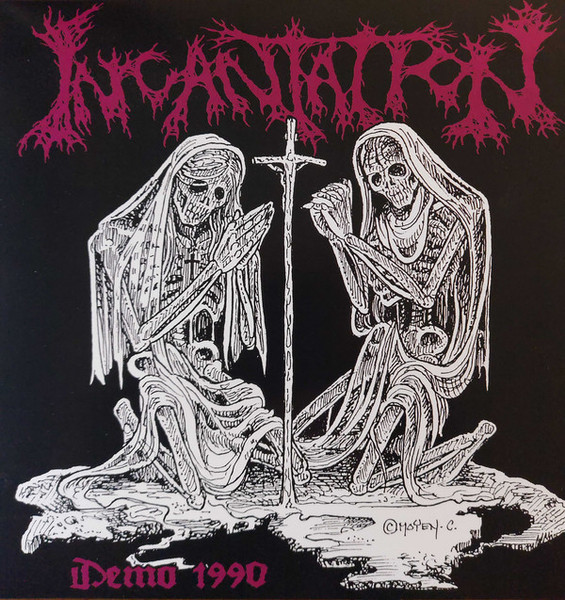 What can be said about Incantation’s debut demo from 1990 that hasn’t been said before? It has not only been tape traded a zillion times back in the days it has also seen several re-releases of the past years. First as a 7” EP through the legendary cult label Seraphic Decay in the same year as its initial release, then a year later on the same format by Relapse Records. Much later, in 2015, Hells Headbangers did a fine job reissuing it as a good looking 12” and it also got replicated by Seven Metal Inches from Germany in 2019. And last but not least, it got this reissue on a 10” EP on the Xtreem Music’s ‘10 Inches Of Deathcult’-series.

On the A-side of this 10” is the actual 1990 demo, which was aptly titled ‘Demo #1’. Because of its long history of reissues, these four tracks do not offer anything surprising. Just the tracks that got Incantation signed to Relapse Records for the year that came. Rather straight forward, brutal old school death metal with that standard early 90’s sound. And though this were only the first steps of the band the great song writing skills and their solid musicianship already shined through.

On the flipside there is a short live-set from October 1990, recorded in Buffalo. Two out of the four tracks can also be found on ‘Demo 1990’ another was saved for a release on their great debut album from 1992, ‘Onward To Golgotha’. The last one is the Hellhammer classic ‘Third Of The Storms’. This set is a nice addition for the EP, but because of the muddy sound I doubt whether many people will frequently play this side of the EP. Of course, many of you who were in the tape-trading scene of the late 80’s to early 00’s or avid bootleg collectors will chew themselves through it, but regardless, this is definitely not much of an easy listen.

Xtreem Music treated this demo well and released it in the now well-known 10 Inches Of Deathcult-fashion, available in three colour variations and with an informative inlay. Though the necessity of reissuing these tracks over and over again can be questioned, there is no need for a discussion on the importance of these early demo songs, for its value, not only for Incantation as a band, but also for the development of (American) death metal as a whole, is beyond dispute. And, frankly, listening these tracks again is not much of a punishment, at all. So, let’s take look at it from a practical point of view, this 10” release just offers another opportunity to get these tracks in your collection.