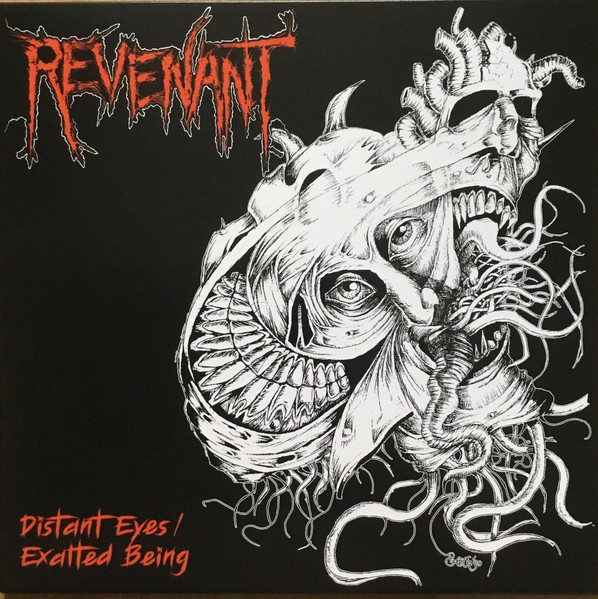 Between all the violence of the American Death Metal bands of the early 90s, it was difficult to really achieve great (commercial) success, obviously not every band had the means, capabilities and luck to grow into the new Morbid Angel, Cannibal Corpse, Obituary or Deicide. Beneath those obvious classics lies a whole world of forgotten bands and almost-broke through’s. One of these bands is definitely the New Jersey-based Revenant. Formed in 1986 by John McEntee and Paul Ledney, among others, who left the band in 1989 to form Incantation (and Paul left Incantation in 1990 to form Profanatica). Well, anyway, Revenant was an early bird and helped form what we now call Death Metal.

Revenant existed for about ten years and although the band was reasonably productive, it just didn’t get off the ground – only releasing one album, ‘Prophecies Of A Dying World’ (1991, Nuclear Blast). They did record quite a few demo tapes and also released two 7″ singles, ‘Distant Eyes’ (1990, Thrash Records) and ‘Exalted Being’ (1992, Rage Records). Those two singles have now been brought together on this 10″ EP in the 10 Inches Of Deathcult vinyl series.

Musically, Revenant takes you back to the early days of Death Metal, a time when the style was still developing and was still nicely infused with Thrash Metal influences. Some dry riffs, fast and choppy drums, Slayer-esque solos and a proto-grunt. Comparisons are best made with for the likes of Ripping Corpse, Possessed, Devastation (Texas), Sadus, Dark Angel or Massacra from France. Remarkable is that both EP’s have quite a similar sound and production while there is some time between the recordings, with ‘Distant Eyes’ being from before the album-recording (1989) and ‘Exalted Being’ from after (1992). Though, these four tracks do sound a bit less aggressive than on ‘Prophecies Of A Dying World’, but that shouldn’t spoil the fun.

Despite the fact that the promotional video for ‘The Unearthly’ from the only Revenant-album was featured on MTV’s Headbangers Ball, it is logical that not all bands achieved (the same) big fame. But sometimes it’s a shame too – as with Revenant, it would have been interesting to hear what a second album would have sounded like. In 2017, Cosmic Key Creations already re-released the album and fortunately Xtreem Music has now made these two EPs available again. Revenant may not have been a truly exalted being, but its modest cult status is certainly in order. (FelixS)