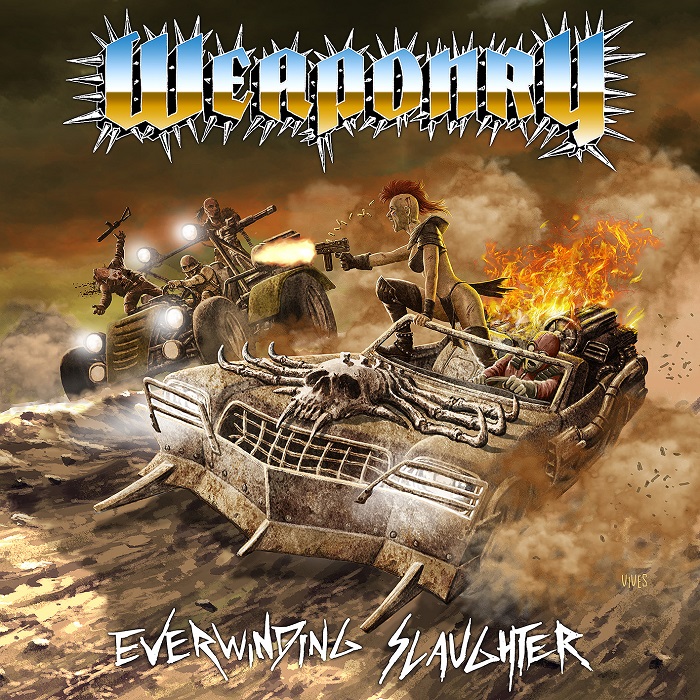 A brand new Death Metal/Crust duo featuring Dave Rotten (Xtreem Music – the label releasing this album, plus Avulsed, Putrevore and Christ denied amongst others) and Canadian Jo Steel. (Expunged / Devil Cross) Everything you should expect from this debut album is reflected in the mad Max styled artwork, as well as the oddly phrased title, ‘Everwinding Slaughter’.

As you may have expected, this album loses little time in getting to the heart of the violence, and the sleazy vocals of Dave Rotten are complimented well by a crushing wall of noise from the ballistic artillery like drumming display and punishing bass. Jo Steel really lets fly behind the kit and is equally as flamboyant when it comes to his propensity for dazzling guitar solos as well as an uber-aggressive style when it comes to the riffs.

‘Everwinding Slaughter’ is a like a full on barrage of beats and tones that are unceasing in their hostility just as much as they revel in the toxic fumes and iron scented tang of bloodshed. If ever an album could be said to mimic the sounds of raging battle then this devastating unrepentant aural catastrophe is most definitely it. (Marksson)