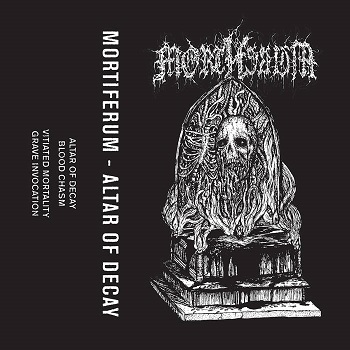 Out of Washington – America, a killer demo has been released in the summer of 2017 on independent base titled ‘Altar of Decay’. Now label Blood Harvest  must have been impressed by this old school death metal sound, cause they re-released it in March 2018. And they are absolutely right to spread the sickness of Mortiferum! The samples used on this disc (especially the somewhat haunted intro) mostly spits out the doomy side of this band and gives the listeners the creeps. Joined with the guitar parts that give you an occult feeling that would give insecure and apprehensive people the shivers and some paranoia. The music is very basic, but the strength en raw sound of this demo is top of the bill. The dissonant riffs are used in a very slow and tide way mostly, the drums sound very simple yet filthy, and the vocals finish of their sound. Old school metal in upper form, I can tell you that! Visit their bandcamp and discover this OSDM gem! (Fredde)

Death metal last years’ rebirth is getting us used to stellar releases one by one . For what concerns the 2017 the first place for the best demo and probably in general for one of the best releases of this genre should be given for sure to Altar of Decay by Mortiferum (Olympia, Washington), a real pearl able to shake the underground with about 22 minutes of true death metal with a central heart of fetid doom. Many are the references to bands like Spectral Voice, Undergang and Phrenelith who are able to play this genre with a renewed violence. Altar of Decay’s sound comes out definite and clear (mastering by Dan Lowndes-Cruciamentum) but at the same time never leaving out rottenness leaving the listener in a total sonorous devastation alternating tighter parts to slow refrains and rides worthy of a corpse in decomposition just risen from the grave; the splendid outro from the first track “Altar of Decay” is an example. The demo, at first independently released , has been then re-pressed in tape (by Graceless recordings and ERP) and in CD by blood harvest last year and also in vinyl by Profund Lore, buy a copy now! Another important point is mentioning the always incredible work of Yuri khahan (Trepanation, ex Funebrarum), by now a cult artist in the American death metal scene, author of various designs of the band, as well as its logo. Said this, we can’t do anything else but waiting for the band’s new material, trying to see their strength on a full-lenght since the demo is already more than mature but we can already foretaste something by the band’s very intense shows, that surely give us big hopes (very recommended: live at Kill-Town Deathfest and live at The Golden Bull). (JPG)