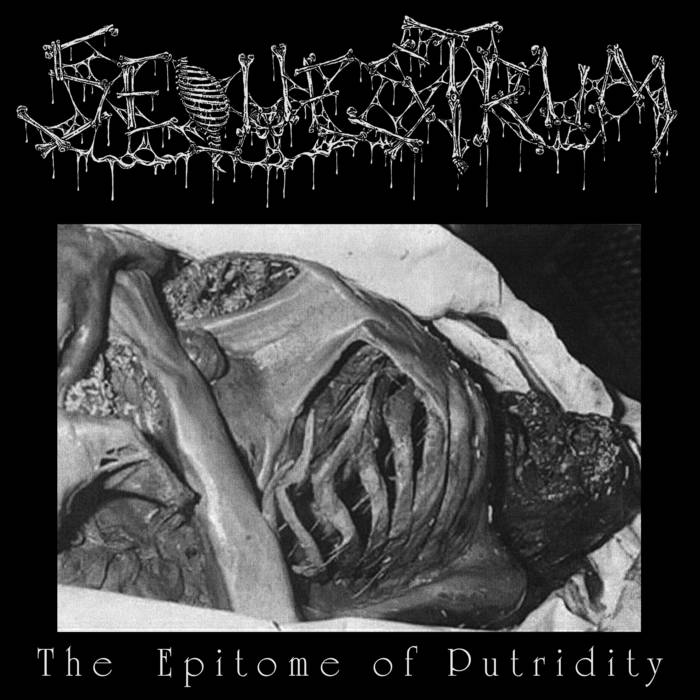 Sequestrum are a new faecal matter spreading Death Metal band from Denmark who feature members of Danish Death Metal stalwarts Undergang and Phrenelith amongst others, and whose debut demo ‘Epitome of Putridity’ truly lives up to its grim moniker. released on both cassette and 7″ vinyl by Extremely Rotten Productions, this is a five track bout of nastiness with a little bit of technical flair thrown into the cauldron just for the shits and giggles of it.

Mixing the stomach clenching growled vocals of all four band members, deep chugging guitar riffs and a healthy dose of bass pummelling and monstrous drum tones, this EP has an overwhelming and putrid disposition, not to mentioned plenty of audio samples of various blood curdling acts, defecation and bouts of sickness.

If you are easily frightened (Or have a stomach bug… seriously I’ve just had one and I’m damn glad I didn’t listen to this… though I could have recorded the outcome and sent it to the band I suppose… I digress) or of a sensitive disposition, for your own sake stay away from this EP. That being said, if you are a depraved individual like me, then knock yourself out.