Abyssal – A Beacon In The Husk 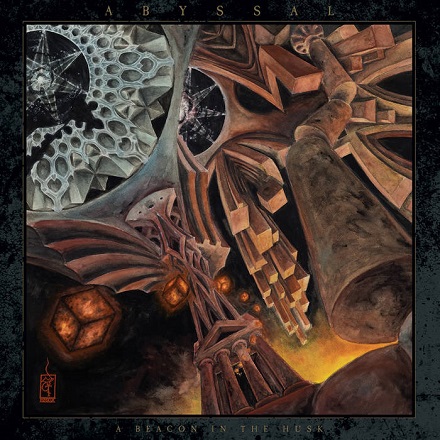 ‘If you stare into the Abyss, the Abyss stares back at you’ is a famous in frequently misused quote by F. Nietzsche a lot of people seem to be familiar with. While he had just been implying if you look for monsters (under your bed or elsewhere… for instance, the mirror is always a good place to look), you have a higher chance to become one. Since the release of Antikatastaseis in 2015 Abyssal has been one of my favorite artists / bands, so note about the new album had been received with as much excitement as there was questioning. Was it possible to make an album which would top his previous works without completely changing the whole essence of the music?

As it had been stated many times before, the sensible combination of genres in Abyssals music are Black, Death and Doom. To anyone familiar with this bands evolution over the years, this is the album we all expected, yet it’s not at all a predictable album. To those unfamiliar with it… you might want to try the previous releases, to fully grasp the whole concept of this one.

While ‘structure’ seemed to be a key word describing this album, it has to be explained a bit more. The structure is more similar to the albums artwork (provided by Elijah Tamu) than a normal, linear structure people usually expect. Things are far more complex and tightly knitted, the album works as one piece of a very dark art – in my humble opinion, Abyssals music is much more than just something you listen to to pass the time. With its convulsing riffing and explosive drumming, it builds a wall of sound affecting human consciousness. This is not easy listening, no matter how loosely you define it. The suffocating atmosphere and occasional, well-hidden melodies make things even more difficult to understand, but once you grasp it, you’ll learn of the undeniable dark and otherwordly beauty it hides. So, to paraphrase the aforementioned quote, to understand the beast, you must become a beast.