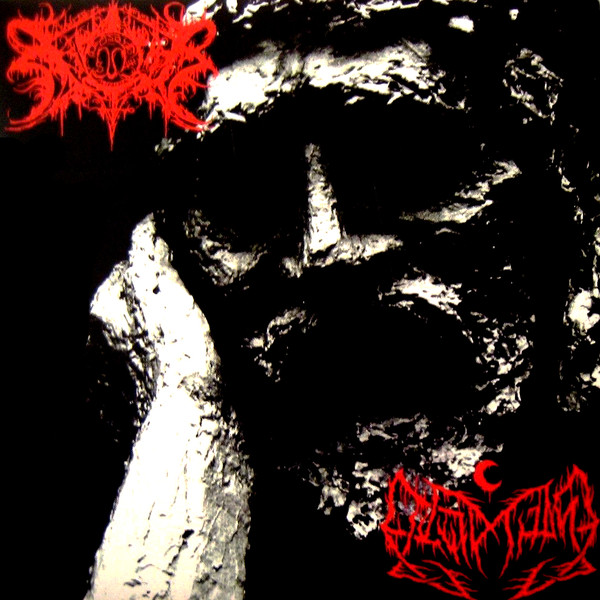 Xasthur and Leviathan are among the leading ug black metal bands of today. A statement I can make, because what both bands created for this magnificent split LP is of the darkest of arts. I can’t even remember a split release of 2 bands that have made music that is so much alike, but is as different in style. Xasthur filled side A with a feast of recognizition. It felt like I was listening to Xasthur for the first time and a nostalgic deja vu came over me. A horrible, dwelling and persuasive atmosphere was filling my room, reaching for the air I’m breathing. With 4 songs Malefic brings together the best I’ve heard since The Funeral of Being. It’s like a retrospective from his already lengthy list of releases and shows the maturity of Xasthur. I think he made his point on To Violate the Oblivious and now gives us Xasthur in it’s purest form. The way it was meant to be.

Side B consist of 2 lengthy songs made by Leviathan. Earlier I mentioned that both their music is alike on this split, but differs in a way it manifests itself. If you know Xasthur, you pretty much know what to expect and what you get. Leviathan on the other hand made something else than you would expect. What he created must have been waiting for this split or has been specially crafted. The 2 songs are “Wrest made” for sure, but have a much slower approach than on previous releases. With less ambient pieces, a more simpler structure and with more room for repetitive guitars, Wrest gives you a peek into his depressive side of mind.

This split will painfully drag you into oblivion. I look outside while feeling kind of numb, empty, the world is grey and for a couple of minutes it feels like the color has gone forever. (JeffreyVDK)