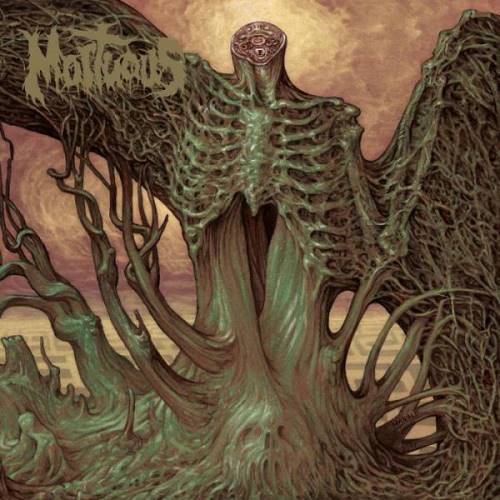 “Imprisoned in the body to this earth we are slaves”; this is how one of the greatest death metal record of last year starts, imprisoned we are slaves of the beauty of an as emotional and deep than decadent and putrid opera. Even on the cover art-masterpiece made by Marald Art we can dive in this world of pain, skillfully delineated by the four guys from Saint Jose, California. After just two great demos the band reaches the peak with a perfect work. The line up is composed by some famous names like Chad Gailey-drums (Atrament, Necrot, Scolex, ex-Vastum, ex-Phrenelith), Mike Beams-vocals/guitars (ex-Repulsion, ex-Exhumed), Clint Roach-bass (Evulse, Cartilage, Augurs) and Colin Tarvin-vocals/guitars (Evulse, Disinhibition, Funerealm).

We find ourselves in front of 40 minutes of down-tuned monolithic riffs alternating with Incantation like-accelerations, all mixed up and arranged according to the best Autopsy school, with stop and go, mid-tempos and valuable musical structures. Other strengths of the record definitely are the precise and powerful drumming also enhanced by a sublime recording (Recorded at Hear Hammer studios by the great Greg Wilkinson) that characterises all the record and of course the guitar textures continuously ready to interwine being at the right place at the right time creating harmonisations, melodic patterns where necessary and framing everything among great solos. The sound that is created, mostly in the most opened parts, as said by the band itself, certainly reminds artists like Paradise Lost, Disembowelment and My Dying Bride and in my opinion even Carcass in their shread era (Necroticism and Heartwork) or the early’s Death (Spiritual Healing, Leprosy). Remarkable are also the record guests such as Chris Reifert and Danny Coralles from Autopsy and Derrel Houdashelt from Exhumed. The published record by Tankcrimes in America has recently been repressed by Dawnbreed in Europe with an even more attractive version in gatefold with some additional illustrations by Marald Art.

After this work, the band gets established with arrogance in today’s new death metal scene panorama next to bands like Tomb Mold and Blood Incantation, we hope to see them as soon as possible here in Europe and possibly at the 2019 kill-town Deathfeast.