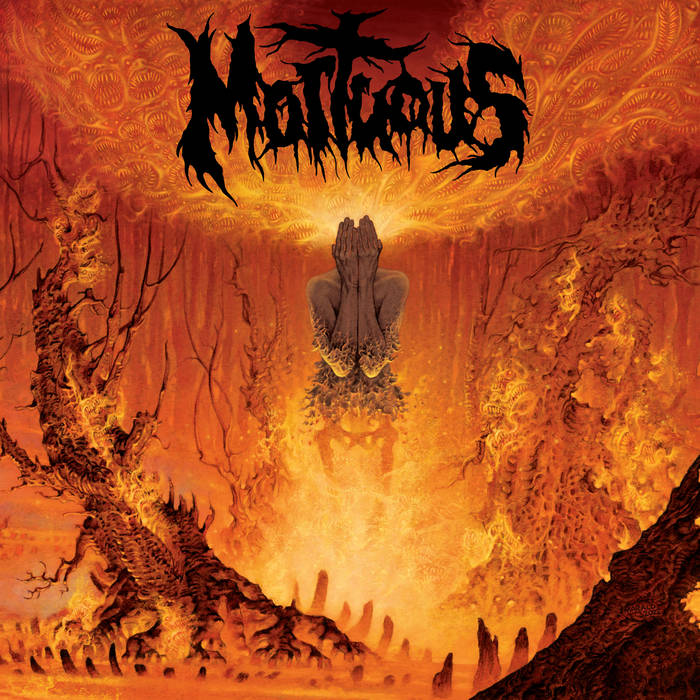 In a scene that is getting more and more crowded with bands that take their major influence from what we now can start calling the Twin Giants of Old School Death Metal (Autopsy and Incantation), it is getting increasingly difficult for a band to really stand out. As is always the case with any ‘revival’, it starts with some great bands but after a while everything starts to resemble each other and the energy and creativity flow from the sub-subgenre. That’s also what I’m seeing now within the Old School Death Metal scene, which seems to have peaked and the saturation is now setting in. The pace at which bands keep on appearing doesn’t seem to diminish in any way, but the quality all the more. Fortunately, there are also bands that, despite all possible objections, stoically continue to practice their beloved Death Metal religion.

One of those bands is Mortuous. People who have been into the Old School Death Metal scene for longer than only recent years, have seen the band appear with their great ‘Demo 2012’. Though not being their first release, it was that demo that nailed them firmly into the underground, showcasing a good combination of the heritage of both the American and Swedish Death Metal scene. Gradually, the band has continued to perfect their Death Metal and Mortuous has become a leading band in the scene. The foundation of Incantation and Autopsy is still deep in them, but by now the band has created a bit more of its own with the addition of various other elements, including a doomy and moody ‘Lost Paradise’ (Paradise Lost) pace and atmosphere, which as times even nears Evoken-like grandeur.

Despite the fact that many of those elements were already audible in the early releases of the band and also played a prominent role on the debut album, ‘Through Wilderness’ (2018), they only come to full maturity on this sophomore album. Those more moderate passages, in which the band explores Doom/Death territories, are graced with gloomy keyboards and even the use of violin – played by vocalist/guitarist Mike Beams. Although it doesn’t sound the same at all, the use of strings takes you to the better old My Dying Bride records. But don’t be fooled, the heavy guitar parts and the deep grunt of Beams ensure that all romantic thoughts stay far away. Another distinguishing element compared to so many copycats is the somewhat more technical ingenuity of Mortuous, with which it sometimes comes quite close to the virtuoso Immolation, including the unique suffocating sound.

Without detracting anything from the dedicated and commendable work of all the labels involved so far, I’ve always been a bit surprised that Dark Descent Records and Me Saco Un Ojo, arguably the leading labels in the genre, have not managed to lure Mortuous into their stables. Both musically and stylistically this would be a perfect match, a pact made in Golgotha ​​during a Mental Funeral.