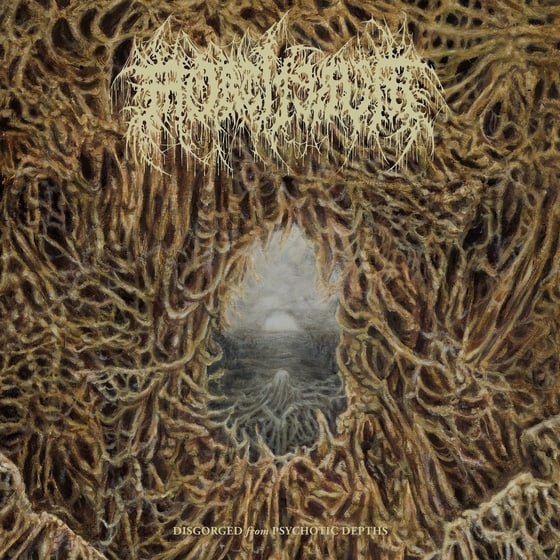 In Latin, the word Mortiferum translates to “death bringing, destructive”, which is exactly what this premiere LP “Disgorged From Psychotic Depths” conveys to listeners. The four member group is based out of Olympia, WA and have only released two other demos within the last couple of years on the scene.

This album clocks in at 36:03 with five elongated Death Moom tracks and a lovely 0:55 interlude titled “Anamnesis”, which reminded me of the track “Crystal Ann” by Annihilator. The track titles are ominous and gives the vibe of descending down to a transient, somber state of mind as if passing through levels of purgatory. First two tracks alone “Archaic Vision of Despair” and “Inhuman Effigy” depict this theme. The album cover was illustrated by their guitarist, Chase Slaker, which to me represents a never ending path to find the light at the end of the tunnel. The earthy color scheme with the black and white detail towards the vantage point of seeing a “faint light” in the end but never reaching it correlates with Moriferum’s sound on this album, which is creatively genius.

Their sound I feel is inspired by newer groups such as Ossuarium and Spectral Voice with hints of old school sounds from Rippikoulu and Incantation. Another plus for their sound is having Max Bowman (ex Triumvir Foul) as part of the group to give a grimy, soiled sound. My favorite track is “Putrid Ascension” (which is the longest track 8:12) since I like how they shift the slow, rotten sound to blast beat with solo unexpectedly at 1:22 and gradually shift the tempo throughout the song. Keeps the listener on their toes for sure. This album is definitely a contender for AOTY of 2019 and highly recommend giving it a listen. (Tori Belle)