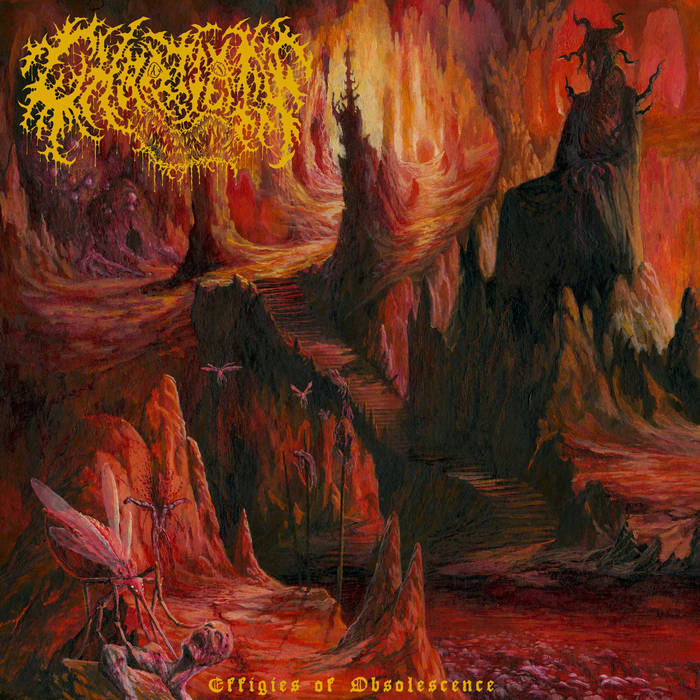 When I was thrown the demos compilation LP ‘Festering Excarnation’ by VM-Underground’s VincentP, I had quite a bit of trouble getting through it. The rough sound and chaotic nature of the songs (hence the band name) did not exactly make it the most accessible record I ever heard. Now, two years after the release of that compilation record, the trio of labels is back to delight us with these Danes’ first album.

So great was the surprise that Chaotian suddenly came out much better. By the way, I won’t claim that the demos were unlistenable or bad, even, listening to them had just turned out to be a pretty tough and hard-to-digest exercise. And so different is the case with ‘Effigies Of Obsolecence’, the sound has had a definite upgrade that makes the complex song structures stand out. The basics of Old School Death Metal, at least in sound, are fully rigged with intricate riffs and rhythm changes. Only sporadically is there some throttling down, both in speed and technical commitment, and a slightly darker sound emerges that gives the listener some breathing space and adds to the dynamics of the album.

When it comes to Death Metal, the Danes have proved they have quite a lot to offer, where it used to be difficult to name another Danish Death Metal band besides Iniquity or Konkhra, now you can already list a string of them. If you compare within the Danish scene, there is really no equal to Chaotian, most compatriots stick to a more basic and caveman-like form of Death Metal. Perhaps the closest thing is Deiquisitor. For a more equivalent reference, you have to look beyond the borders of the country, perhaps a description somewhere between Immolation, Gorguts and Dead Congregation would be most appropriate. That does justice to both the technique with which the Danes play and also the somewhat oppressive atmosphere created.

Although it does not have the level of, say, Altars, who recently released their second album, this debut is certainly one to be proud of. The step taken between the demo recordings and this record can certainly be called stunning and it makes all the more curious what can be expected on the follow-up.