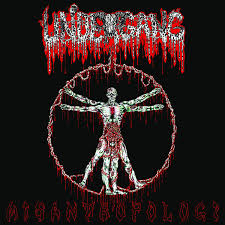 It’s official… you can now dismiss all your possibilities for “album of the year”. It has been found and everything else will be a mere runner-up. I was anxiously waiting for the release of the new Undergang album, the same way a kid is waiting for Santa Claus to come down the chimney at Christmas Eve. Except Santa is imaginary (sorry, kids) and Undergang is not and is not fooling around! Keeping their trademarked ultralow sound, Undergang found a way to incorporate new elements into the mix by the way of guitar melodies and even a piano intro! Combined with all the elements Undergang usually brings to the table, this is, by far, their best release and clearly puts them light-years away from the rest of the competition on this filthy and rotten death metal subgenre. One final note for the excellent tribute to the Finnish band Disgrace with a cover of “The Chasm” (10th and final track). “Misantropologi” was recorded in Earhammer Studio with Greg Wilkinson from July 28th till August 2nd 2016 and the mixing and mastering was done by Greg Wilkinson. The artwork was done by Mr. David Mikkelsen (vocals / guitars). The album is now out on CD (Dark Descent from the US), vinyl (UK’s Me Saco Un Ojo – check the “Glow in the Dark” version!) and tape (Denmark’s Extremely Rotten Productions). (Antonio)