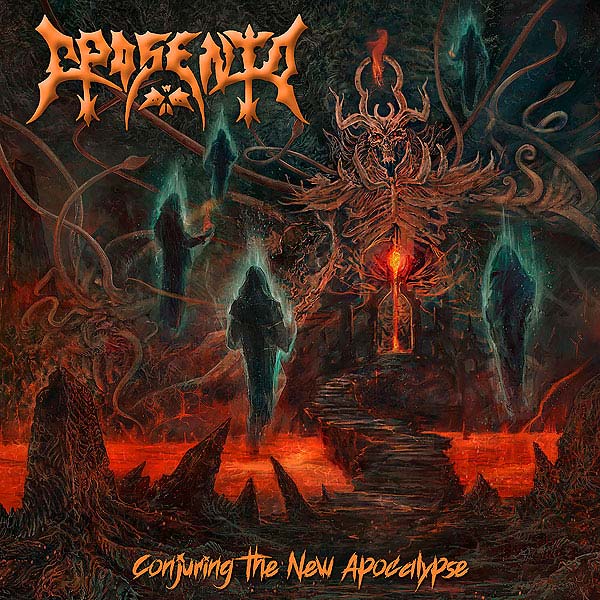 Formed in 1990, the first sign was given in 1992 with the demo “Bloody Ritual”, followed by a split (Live in Najera), a demo (Eternal Agony)and 2 Eps (Welcome to Darkness/Ritorno a la Muerte) as well as some compilations/tribute records before finally releasing their first full length “Aposento” in 2014. 3 years “Bleed to Death” their second album was released and now, 3 years later again, “Conjuring the New Apocalypse”, a crushing Brutal Death Metal record the old way. Suffocation, Cannibal Corpse, Obituary, Deeds of Flesh, Morbid Angel, Deicide, later Pestilence or Morta Skuld to give you an idea. Mostly deep grunting vocals, like a deep version of Mameli on “Resurrection Macabre” by Pestilence with some occasional twin vocals Deicide-Style.

The tracks vary in speed and atmosphere, having those old school Obituary-like riffs with mid-tempo beats or the more Suffocation hammer blasts with cool snare fills in it (Mike Smith was a monster with those). No matter if mid-tempo crushing bulldozer riffs, frantic blast orgies or slow grave stenching tunes, Aposento manage them well and wove them into a bloody platter of (brutal) Death Metal. 90’s are strongly present and well transported into the 2020’s thanks to the good songwriting and killer production. Occultism, Death and other tasty themes belong to their catalogue as well and are beautiful captured on the front cover.

Compared to the classics the “hits” may miss, even If there are some truly killer songs like “Liber al Vel Legis”, “Vamachara-The Left Hand Path”, “The Dweller on the Threshold” or “Revelation 777” or the great finale “Doomsday-The Metanoia of Redemption Proc”.

Anyway, the overall impression is more than pleasant and I am sure every fan of Death Metal will find something to bang his head for. Props to the band and to Xtreem Music for this release. The new apocalypse can come. (DPF)