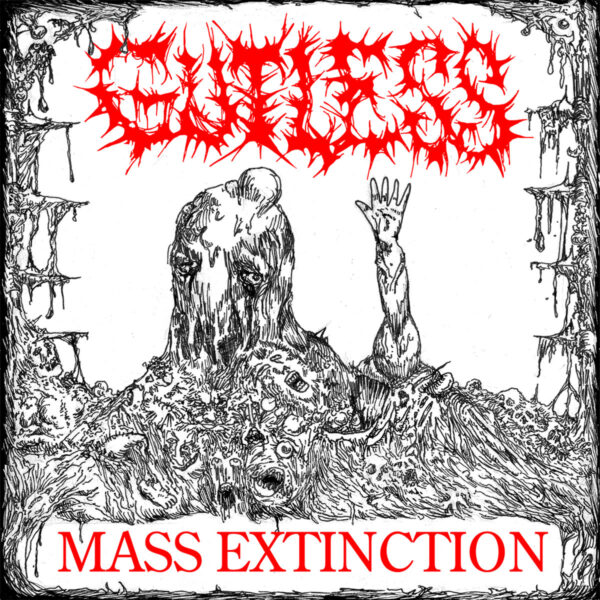 The Earth is overpopulated and polluted beyond comprehension.  It is being raped of resources faster than they can be replenished.  The plague of humanity is lustfully brutalizing our world in a fervent race to bring the Anthropocene extinction to fruition;  The “Mass Extinction”. Yet, based on the lyrics on this demo, I am not sure Gutless had envisioned humanity’s extinction to be quite so relaxing as dehydration, starvation and disease.  It appears that we may be in store for what sounds to me like horrific alien overlords keeping us alive as long as possible for unimaginable torture and pain, until we finally succumb to our parasite infested wounds.  Drowning in each other’s pus and blood while being ruthlessly dissected and disemboweled. You thought global warming with associated wet ankles from rising sea levels was a problem?

As if a microcosm of the overarching theme of the human race’s cancerous infiltration of our planet, the sheer number of bands performing at a very high level right now is akin to the amount of human excrement pouring into the crust of our insignificant orb.  And Gutless? Well, this band is a beautiful, fantastic, giant shining glob of the aforementioned shit that deserve more attention and praise than the majority.

Separating one’s band from all the others is quite a task at this point.  Australia is doing just fine though. Perhaps it is related to living among a ridiculously high number of deadly creatures and inhospitable geographic death-traps.  Whatever it is, Aussies get it. While Gutless sonically reside closer to their compatriots Ignivomous, and clearly grew up influenced by the legendary Australian riff-masters Abramelin, they have certainly earned a strong position alongside the likes of some of my favorite Death Metal bands from down under.  Vile Apparition, Faceless Burial, Cemetary Urn, and Horrisonous to name a few.*

Yes, I know, I know.  This is another demo that certainly would sit comfortably within the early 90’s Golden-age Death Metal rampage.  However, you want this. You NEED this. There are plenty of intense, fiery, fast paced blasting runs with transitions to juicy, muscular, mid-paced Conan The Barbarian riffs that would fit in just fine on a Disma album or with any of Gutless’ Maggot Stomp brethren.  There are palm muted down-picked power chord chugs and slides, galloping triplets, and pinch harmonics that would make Robert Vigna (Immolation) smile.  Occasional tremolo guitar sections add flavor to an onslaught of  blast beats, running double pedal kicks and snare hits that will blow holes in your chest.  The vocals are excellent with a tasteful amount of reverb.

This demo is devastating.  It is relentless and unforgiving.  No, It does not break new ground. However, it is firmly planted in the soil that you will want to joyfully caress and tenderly kiss when getting home from your nephew’s local gig at the “No Pussies Allowed Bro00tal-Slamming-Deathcore-Karate-Kicking-SLAMMY-SLAMINGO-SLAMMMY-SLAM-FEST”. “Mass Extinction” is precisely what you need to recover from a long all-ages night filled with elbow blocking over-exuberant limb flailing scene kids bedazzled with lip rings, ear-gauges, flat-brimmed hats, athletic shorts and over-the-top hot-female-dismemberment-murder-porn T-shirts made by Incels with computer art degrees.

With “Mass Extinction”, Gutless will crush you into a meaty paste and use it to make a putrid bolognese sauce.  To be consumed and subsequently shit into our Earthen pustule of increasingly leprositic Terra Firma.

*Of course I am aware of and love dISEMBOWELMENT, (early/Chalkey era) Psychroptic, Portal and Grave Upheaval……but you could just Google it if you want a comprehensive list of every good Australian Death Metal band……geez.  (Chris Topher MC)