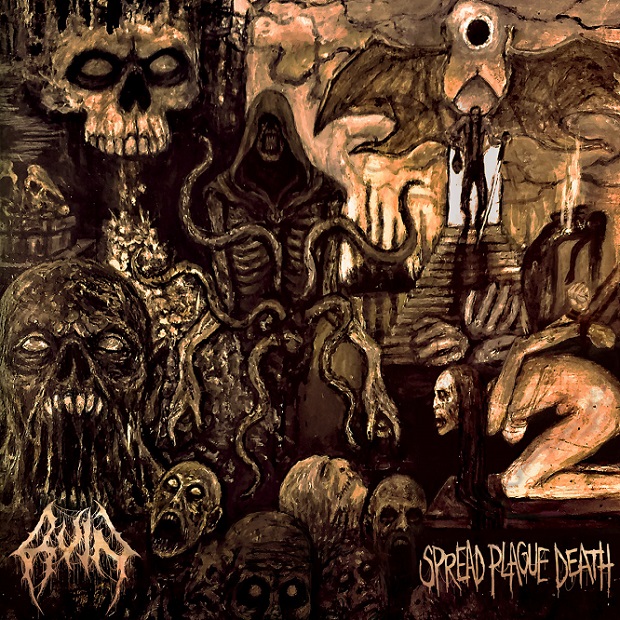 Three years since previous full length “Human Annihilation”, with six splits and three EPs written in between, “Spread Plague Death” is elongated to roughly 45/50 minutes of material this time around, perfect for those who can’t get enough of their singular modulated articulation. Gotta commend how each track moderately intensifies as the album proceeds further, boosted with adornments of samples and escorted alongside melody, doom, & sludgy riffs & even includes a couple instrumental tracks “Cosmic Vengeance” & evocative viscous closer “Postmortem Dark”.

If you want trudging distortion, try “Antemortem Dread” or “Awaken Rotting Decay”. Those who favor direct dosage of Death Metal would fancy succinct “Murderous Delirium” or the demolishing drum work on “Repulsive Universe Inside Nightmares”. As for samples, the title track has unpleasant audio of cannibalistic rapist Kevin Underwood, accelerating into deranged madness between guitars & percussion. Another notable one is the tense intro to “Quietus (Slit Throat)”, taken from “The Adventures of Mark Twain: The Mysterious Stranger”(1985), dense, weight is literally on your frail shoulders, futile to existence.

Favorites are the appalling “Ornaments of Flesh”, continuously slaughtering your earlobes and Mihail’s rabid beast hair raising cadence, you’ll shit your heart out. One other is their lengthy “At One With The Earth & Worms”, encapsulating what Ruin represents altogether.