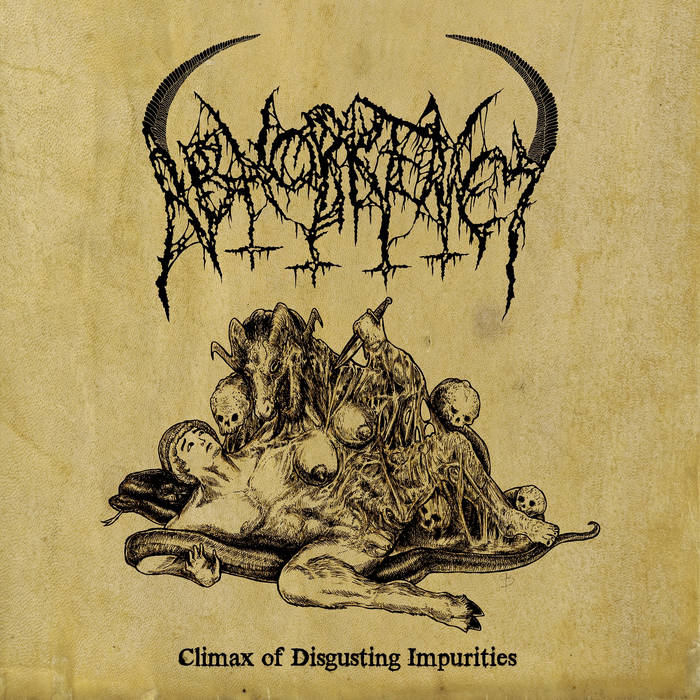 In our endless search for interesting stuff to put into our ears, we often forget that not everything ‘new’ is or should be groundbreaking. Perfecting the craft often takes years and several different actors try to improve the existing. Sometimes the so called ‘new’ literally has no point in meddling into perfecting the ‘old’ ways. One of such is definitely the new album by Abhorrency, ‘Climax of Disgusting Impurities’. Even though in my opinion the title (in combination with the albums cover) should tell you all about what is going to happen, let me clear stuff a bit more for you.

While the so called Bestial Blackened Death Metal is definitelly not something new (and some of us have been binging on it for decades) and the usual topics it uses in its lyrical themes (blasphemy, perversion, satanism etc.) might seem worn out (mostly because the pompous popular bands that try to portray themselves as ‘satanic and blasphemous’, yet make themselves look like Hello Kitty is trying the same… and being more succesful at it), it takes a lot of talent and skills to produce an absolute banger of an album, while literally not inventing anything new.

Impenetrable wall of noise, in which you can actually hear the instruments and the vocals, begins after of a couple of seconds into the opener ‘Sledgehammer Profanation’ (white noise in the opening songs are obviously a must in this subgenre) and during the album it encapculates you, barely leaving any breathers. While 32 minutes doesn’t seem much, it will leave you beaten, bruised and exhausted, yet craving for another go. It is definitelly difficult to write and play something so bestial and at the same time making sure everything that is going on on the record is heard and recognized (okay, it might take a trained ear to do so, if you didn’t understand it the first time, listen again) as a particular instrument or vocals where you’re able to distinguish the words that come out of a scary combination of growling and shrieking.

It’s definitely true nothing here is groundbreaking, yet it serves as a sincere bow down to the original masters of the genre and perfecting the craft they invented. This album is definitely a must have to any fan of the more bestial or extreme metal. In a more understandable wording: ‘It’s sick’.