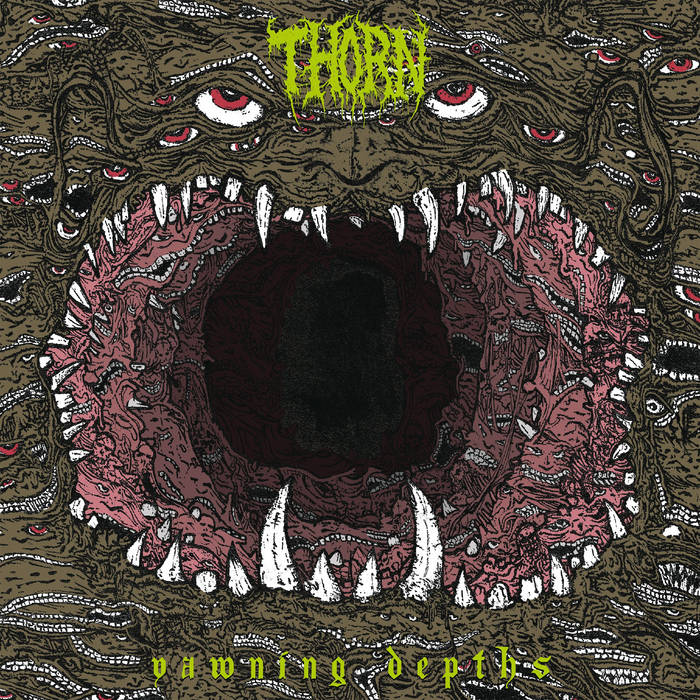 Brennen Westermeyer wastes no time in creating an unfathomable dilapidated ambience in his solo project Thorn.

Though not extensive enough to be total “Doom”, he has a knack to effortlessly mesh riffs that sway into the Death/Doom format, leaving you in awe with the finished product & his second LP “Yawning Depths” is no exception. Still keeping within similar time spans (two less minutes and only eight tracks), lyrical content mainly towards dejection, & artwork that has circular focal points leaving you to wonder if moving forward, what will you walk into.

This time around DrollMeadow did the cover art and instead of a cavernous setting, it’s a colossal monster with an opening of teeth and embedded with surrounding small faces opened wide for you to never be seen again. Aside from the cover art presenting a different palette & setting, the production quality has progressed, as well as the writing which is more lethargic this time around with the titles like “Noxious Existence” & “Unknown Body of Light”, or even closer “Graven Moonglow”.

It’s more upbeat but still intertwines the portentous bleak undertones with the guitar riffs especially on “Cavernous Shrines” & the album title track as well as simplified no frills drumwork. Vocals are abhorrent & husky, giving off a menacing sentiment, notable on opener “Hellmouth” & the swift “Judgement’s Throne”. My favored tune is “Lapis Lazuli”, has a melancholic feel to it but also admire it for the context of it referring to a crystal that symbolizes strength, courage, wisdom, intellect, & truth, kind of going against the grain of the overall subject matter that’s displayed within his writings and leaves a glimmer of hope for the listener.

Within a short time, you too can sense the anguish among this album & digest its less than 25 minute crushing circulation. (Tori Belle)